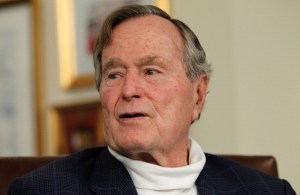 He was released Tuesday from Houston Methodist Hospital. He spent a week in the hospital as a “precautionary measure” after experiencing shortness of breath.

“President Bush was released from the Houston Methodist Hospital today. He is now resting at home, grateful to the doctors and nurses for their superb care,” Bush spokesman Jim McGrath said in a statement.

The 90-year-old Bush was also hospitalized for two months in late 2012 for bronchitis. Aides have said his prognosis this year has been much better than it was then.

#PrisonBae: Meet the Hottie Behind the ‘Cutest Mugshot Ever’