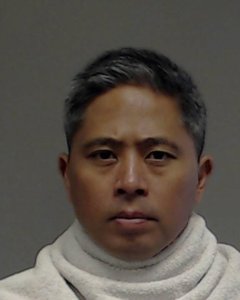 Jonathan Ong Aviles, 46, had been identified as the suspect involved in offenses of unwanted physical contact with female employees of local retail businesses in Celina; Aviles turned himself into police May 15. He was taken to the Collin County Detention Center on two arrest warrants for ‘Assault Causes Physical Contact’ — Class C misdemeanors — and bonds totaling $4,000.

Police were called May 3 to four Celina retail businesses, all of which employed teenage females, where reports were given of an Asian male coming into the stores, starting conversations with the young ladies, and telling them he was a producer and wanted clothes for a popular television show he was shooting.

One victim was asked to try on clothes the man said he was considering; when she did, the suspect put his hands around the the girl’s waist and asked her what her most attractive physical quality was.

Another victim reported the man inappropriately touching her above the waist.  Both told police the man asked how they felt about posing nude and traveling to Los Angeles.

Aviles could be seen on video from store security cameras in Celina, Frisco, and Prosper.

Jens Nygaard Knudsen, creator of the LEGO minifigure, has died at the age of 78.

The former designer was responsible for developing the small LEGO figures before they were released to the public in 1978.

When Kwane Stewart first decided to become a veterinarian, he had no idea his job would become less about the animals he treats and more about the humans who own them.

The 49-year-old animal lover spends his free time driving around California and spotting homeless people with animals. But his goal isn't to take away their pets -- it's to treat them, for no cost at all.