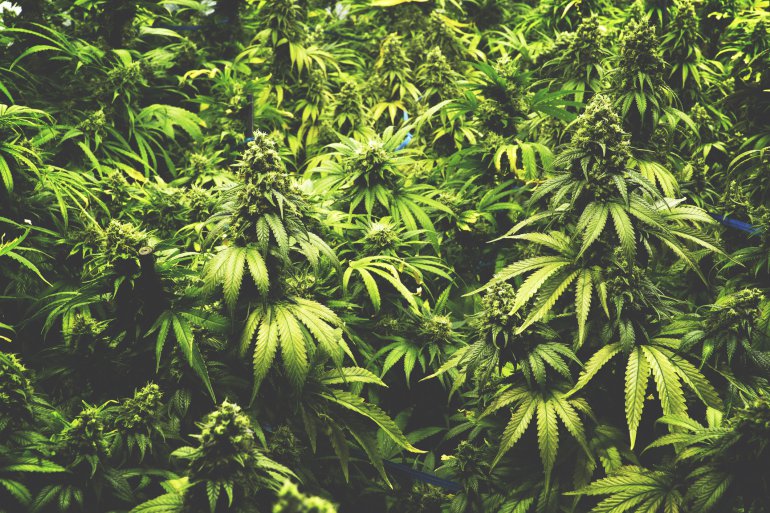 On this election day, voters in five states will get to decide whether marijuana should be legal to use recreationally.

It’s on the ballot in California, Massachusetts, Maine, Arizona and Nevada. Voters will also decide whether it should be used for medical reasons in three other states.

The drug is still illegal under federal law, but it has grown in popularity over the years. The number of adults who have smoked weed has nearly doubled in three years, according to a Gallup poll released in August.

It is the No. 1 illicit drug of choice for Americans, according to the 2014 National Survey on Drug Use (PDF), although only one-third of users reported an addiction to the substance, unlike most all the other illicit drugs used.

Currently, it’s legal to use recreational marijuana only in four states and in the District of Columbia. Colorado and Washington state voted to OK it in 2012. Alaska and Oregon voters approved it in 2014. Medical marijuana is legal in half of US states and is on state ballots this year in Montana, Florida and North Dakota. It will be on the ballot in Arkansas, but the results won’t count after the state supreme court struck the issue in October, due to invalid signatures.

For the states where recreational use is legal, it seems to have been a boost to the economy. The marijuana industry created more than 18,000 full-time jobs last year and generated $2.39 billion in economic activity in Colorado, according to an analysis from the Marijuana Policy Group (PDF).

There have also been some health consequences. Emergency rooms have seen a significant increase in adult marijuana-related exposure cases.

The number of calls to poison control centers involving Colorado children has gone up, as has the number of children who’ve been taken to the hospital for treatment due to unintentional marijuana exposure, studies show. There have also been more school suspensions, marijuana-related traffic deaths, pet poisonings and lab explosions.

Here’s what’s on the ballot.

If marijuana becomes legal in California, the world’s sixth-largest economy and the country’s most populous state, it could have the biggest impact on the national scene.

In 1996, the state was the first to make medical marijuana legal.

A “yes” on Proposition 64 would make it legal for people 21 or older to use it recreationally. There would be a 15% sales tax, and its cultivation would be taxed. The money would be used in part to study drug research, to study treatment and to help with enforcement of the law.

The state’s two largest newspapers back the measure, as does the California Democratic Party, while Republicans are against it. Support has averaged around 59% since the beginning of August.

Massachusetts already has some marijuana-friendly laws. Medical marijuana became legal in 2012, and a 2008 ballot measure replaced criminal penalties with civil penalties on adults who possess an ounce or less.

Question 4, as the recreational use measure is called, would legalize it and allow the commonwealth to tax and regulate its use and sale, much like the way alcohol is handled. That means people 21 and older could use it, possess it or grow it. They can have under 10 ounces in their home and under 1 ounce in public and be allowed to grow six plants.

A number of politicians there support it, as does the American Civil Liberties Union.

Roman Catholic bishops in Massachusetts also argued against legalization, saying it is “not a path civil society should chose to take.”

The Boston Globe wrote in support of the ballot measure, arguing, “legal marijuana is coming. Let’s get on with it.”

In Maine, a “yes” on Question 1 would make it legal for a person 21 or older to use marijuana.

The state would put a 10% sales tax on the drug and allow social clubs and retail groups to sell it.

Maine legalized medical use of marijuana in 1999. Previous attempts to legalize it for recreational purposes have been unsuccessful.

The law would allow people to use it in a nonpublic space or in a private residence and institute a sales tax, with 98% of revenue from sales taxes going to a general fund.

Maine’s governor is against the legislation, calling it “not just bad for Maine, it can be deadly.” Supporters have raised more than $3.2 million to fight for it. The state’s newspapers are divided on the issue.

The battle for legalization in Arizona seems close, according to polls.

Medical marijuana has been legal in the state since 1996.

If voters pass Proposition 205, it would be similar to other state laws up for consideration. People 21 or older could possess up to 1 ounce and grow up to six plants in their homes.

The law would also create a Department of Marijuana Licenses and Control that would regulate, test and oversee sales.

People caught smoking it in public places would be fined, as would people who possessed more than the legal limit.

In Nevada, a “yes” on Question 2 would make recreational use of 1 ounce or less legal or one-eighth of an ounce or less of concentrated marijuana legal for people age 21 and older.

Medical marijuana was legalized in Nevada in 2000.

The law would allow stores, manufacturers and distributors to set up shop in the state.

People could also grow six plants for personal use as long as it was in an enclosed area with a lock. The law would create fines for growing marijuana within public view. You could also get fined for smoking it in a public place or in a moving vehicle.

No marijuana businesses would be allowed to set up shop within 1,000 feet of a school and 500 feet of a community facility.

Nevada would put a 15% excise tax on it. The money would go to support schools and the regulation of the drug.