FRISCO - We told you about the Frisco ISD principal whose transfer from Frisco High resulted in a student walkout. Now, Sylvia 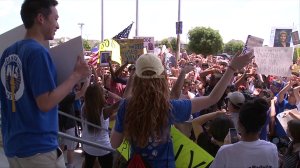 Palacios is firing back. And we're not talking about the petition that has thousands of signatures on it or the "Save Sylvia" campaign.

"We have filed a grievance," said Palacios' attorney, Tiger Hanner. "In Texas, every school district is required to have a grievance procedure."

That's right. Looks like the principal is schooling FISD on the law.

"Being the principal at the flagship campus of a school district is dramatically different than being an associate principal at an alternative behavioral campus."

Attorney Hanner calls Palacios' "reassignment" a demotion and says the move is nothing more than politics at play.

"She's pretty devastated. Initially, she was in shock. Her performance evaluation two months before this happened was superlative," Hanner explained. "Politics played a bigger role than what's in the best interest of the kids, or that campus, or even any real consideration of Mrs. Palacios' career."

"Mrs. Palacios has skills that are needed at the Student Opportunity Center. And it's not a punishment, but a reassignment," FISD Superintendent Dr. Jeremy Lyon said in a statement.

Lyon also noted he couldn't share specifics about his decision.

"It is clearly a demotion," he said.

Hey, the school year may be coming to a close, but looks like this topic is heading into summer school. We're told a meeting with Lyon is in the works.

Of course your baby is the most adorable child you will ever see. But are they cute enough to be the new Gerber baby?

For the 10th year in a row, the childhood nutrition company is continuing its annual photo search.

MAUMELLE, Ark. (KARK) — A naked man attempted to board a school bus occupied by children in Maumelle on Thursday, according to police.

The Maumelle Police Department were called to the parking lot of America’s Best Value Inn.

CDC says Chicago woman is second coronavirus case in US

Remember the story about the Dallas dog, ‘Lamb of God?` Here’s part 2!