TRINIDAD- Jack Warner may have a lot to worry about these days. The former FIFA executive is probably somewhere picking up his face after unsuccessfully defending himself against corruption charges.

Warner went on a rant Saturday, criticizing the U.S. in a video posted on his site Warner TV. Problem is, the article he’s holding up in the video is phony!

If you look closer, it's “The Onion,” a satire site that purposely publishes fake stories.

“Why does the U.S. frantically want to hold games on May 27th,” Warner asked in the video.“May 27th, two days before FIFA election. Something has to be wrong!”

Yeah, what's wrong is that the next FIFA games weren't in May. They don't start until 2018 In Russia.

After word of Warner's mistake traveled around the world, the video was taken down. Pretty sure he's got bigger fish to fry since he was arrested last week on corruption charges.

But, don't worry Warner.  You're not the only one who's fallen for those sneaky satire sites.

CNN’s Anderson Cooper called out “The Onions” sister site “Clickhole” after they made up a commencement speech saying he compared getting a diploma to getting a hole in one. 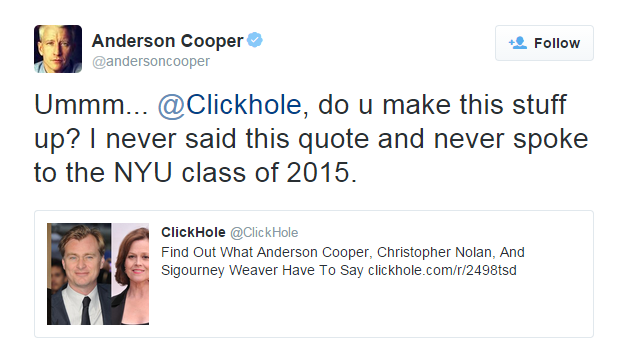 Until he realized the site was a joke.

AUSTIN (KXAN) -- Texas lawmakers are already gearing up for a legal fight against the Biden administration.

ISTANBUL (AP) — A devoted dog has spent days waiting outside a hospital in northern Turkey where her sick owner was receiving treatment.

The pet, Boncuk (Bon-DJUK), which means bead, followed the ambulance that transported her owner, Cemal Senturk, to hospital in the Black Sea city of Trabzon on Jan. 14. She then made daily visits to the facility, private news agency DHA reported on Wednesday.

WACO, Texas (KWKT) - Baylor University has announced that it has opened its own on-site COVID-19 testing lab and research facility.

The project is in partnership with My Labs Direct.

LIVE: Biden to put forth new virus strategy exactly a year after 1st confirmed case in US