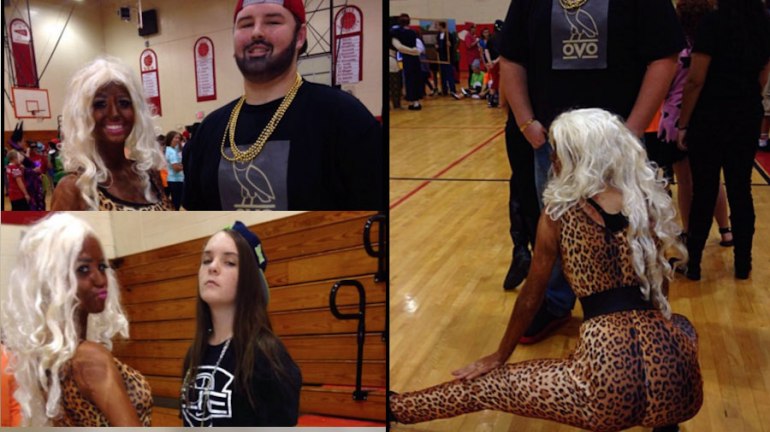 Twitter user @Emmajohns129 is a Florida high school student who decided to dress up as Nicki Minaj for homecoming, complete with black face makeup. She then tweeted a collage of photos of her and her friends, and the Internet is planning to never let her forget about it.

Not only did Emma receive a series of angry replies to the tweets, but offended parties also found out what high school she attends and what college she’s applying to. She has now deleted her Twitter account, but several people have already emailed her high school and alerted the University of Florida where she’s applying for school next fall.

@I_Exude_Sarcasm @chandyvan @emmajohns129 she's trying to apply to UF. I know the admissions people up there. I'll send this in today

The dean of Emma’s high school began emailing out a form letter reading, “Thank you for the information. Our administration is investigating this.”

Just in case the administration’s investigation isn’t enough, her superintendent is also being informed that the costume was worn to a school Homecoming event and no one said anything prior to the photos being tweeted.

Before @emmajohns129 deleted her account, she did tweet an apology for any offense the costume may have caused, which was screen capped by the people calling her out.

It’s safe to say that even if @Emmajohns129 doesn’t get reprimanded by her own school system or University of Florida (who has their own troublesome past with blackface) the Twitter call-out will be enough to make her re-think her costume choices in the future. If she decides to dress up as an African-American person again she should follow suit with the likes of Ellen DeGeneres and Miley Cyrus, who were able to do it without blackface.

For anyone else that doesn’t get why it’s a big deal, remember the cautionary tale of Julianne Hough’s 2013 Halloween costume. Twitter user @Sammi_sp also spells it out pretty nicely.

I'm honestly amazed by people who wear blackface in 2015. It takes an absurd amount of disrespect to do something so historically hateful.

Why the pandemic is creating plastic surgery trends