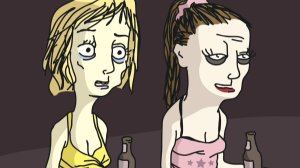 SAN DIEGO, Calif. — You’ve heard of eating disorders like bulimia and anorexia, but there’s another unhealthy diet fad that docs say is getting out of hand — drunkorexia.

“Drunkorexia? No, it sounds like a lack of drinking,” Donovan Hightower said. “I don’t know. What is that?”

Uh, try the lack of food in order to compensate calories for binge drinking later on.

In fact, the National Institute of Alcohol Abuse and Alcoholism says more than 40% of college students admit they’re binge drinkers.

And drunkorexia doesn’t discriminate either. Both girls and guys say they skip meals so they can consume unlimited amounts of booze.

It works like this — a drunkorexian would trade in a Chipotle burrito totaling over 600 calories, so they can guzzle down a bottle of beer, glass of white wine and maybe a margarita. That’s already over 400 calories.

And if the goal is to get wasted, we’re guessing folks won’t stop there.

But before you raise a glass or two…

“You’re being exposed to long periods of time when you’re malnourished and not getting what you need,” Dr. Hanh said. “And then you’re exposing yourself to high levels of alcohol.”

Hey, watch out when you go you to party, people. Drink and eat responsibly!

Which Valentine’s Day gift will be the most popular …

Before picking up the conventional bouquet or box of chocolates, here are seven Valentine’s Day gifts that will be the most popular in 2023.

How to stay inside this Valentine’s Day by ordering …

No matter which wine you’re looking for this Valentine’s Day, from cabernet to pinot grigio, you’ll be able to find it online.

Since a romantic meal is the focal point for many couples on Valentine’s Day, having the best table decorations is crucial to creating the proper mood.

How to make a mocktail blackberry mule

‘Bringing the family back to the dinner table’ with …

Dry January: How to make a Mocktail mojito the ‘Faux-jito’

This Texas city among best in the country to get …