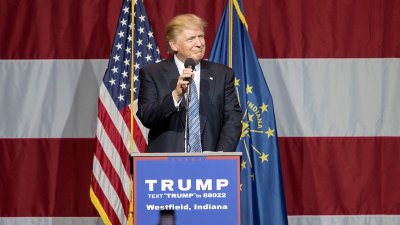 America’s ultimate showman, Donald Trump, has turned his search for a Republican vice presidential pick into a real-life political thriller.

He spent Wednesday beguiling the media and playing on the hopes of his final few candidates to build tension, drama and — perhaps — a climactic final plot twist.

Trump is on the cusp of making the most important decision yet in his short but explosive political career. He said late Wednesday that he will announce who will join him on the GOP ticket at 11 a.m. on Friday.

But despite his image as confident boardroom manager who delighted in decisively telling unfortunate saps “You’re Fired,” Trump has seemingly found the real-life quest for a political partner a little more difficult. Indeed, he seems to be caught in a classic tug of love, between his heart — apparently yearning for a combative wingman like New Jersey Gov. Chris Christie — and his head, which may lean toward the more conventional political selection of someone like Indiana Gov. Mike Pence.

And in between lies former Newt Gingrich, the scrappy former House speaker esteemed for his political acumen and beloved for his off-the-cuff style.

“I’m narrowing it down. I mean I’m — I’m at potentially four. But in my own mind, I probably am thinking about two,” Trump told Fox News on Wednesday.

Trump’s penchant for the unpredictable, of course, means the selection process remains fluid.

Further evidence of a potentially conflicted conscience: While he said Tuesday he wanted a running mate “skilled in hand-to-hand combat,” he flipped the script late Wednesday, telling Fox News he actually doesn’t need a vice presidential candidate in the mold of an attack dog. “Always, you have to say, ‘Will that person be a good president?’ ” Trump told the New York Post last week. “But for me, the most important thing is chemistry.”

Trump is doing all he can to drum up speculation about whom he will tap as his running mate, while not hinting one bit about the final choice.

Dog has first case of coronavirus in Texas animal