With all the NFL controversy over players standing or kneeling during the National Anthem, one celebrity has a solution no one has thought of yet… buy the league!

Sean “Diddy” Combs used Twitter to express his thoughts about the league and how it’s affecting black players who want to use their platform freely to express their stances. 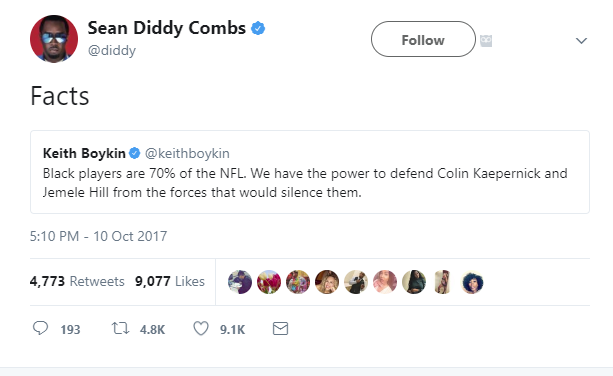 NFL owners, like Dallas Cowboys’ Jerry Jones, have told their players if they don’t stand during the National Anthem, they won’t play, giving players a tough decision whether to kneel or stand.

Diddy wants to fix this issue by buying the league so players can to what they want.

I did have a dream to own a NFL team but now my dream is to own our own league!

Have freedom to be a great human and protest for your people without being demonized for your beliefs as a KING!! NEW DREAM ALERT!!!!

But his solution is pretty much not going to happen. There are 31 team owners and a publicly owned, nonprofit team that probably won’t all sell to him.

According to Forbes, Diddy’s network is $820 million, and all the the NFL teams total at nearly $75 billion. That makes him quite short of his goal.