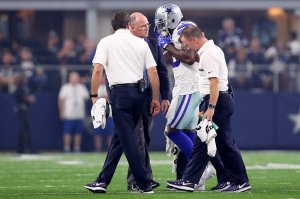 FRISCO, TX — The mystery of the “Missing Dez Bryant” finally got its answer, even if you think it’s a lousy one.

“He really thought that he was going to get some bad news when he got the MRI on Monday morning,” Jason Garrett told the media on Thursday. “So he, like some of us do in life at times, he avoided it and he didn’t come in and take care of his business.”

Yeah, after Sunday’s injury, Dez dodged the Doc for the past week, skipping meetings and practice afraid of bed medical news. Luckily, the news wasn’t too terrible: a hairline fracture in his leg that he might be able to play through.

Garrett said his absence was a side effect of his insane passion, but that it’s also one they’d rather not see.

Of course Cowboys fans don’t really care where Bryant was Monday through Wednesday, they just want to know where he’ll be on Sunday! As usual, it’s still wait and see as to how long 88 might be out. So it’ll be up to the rest of the receiving corps to fill in the gap if he’s gone.

“You just can’t flinch in those situations,” said tight end Jason Witten. “We feel like we have depth at the wide receiver position, Brice [Butler] is somebody now who’s in the second year of our system, made some plays, has some big play ability and we’ve just got to keep moving forward.”

RICHMOND, Va. (WRIC)- The mother of an adult son with autism is among those supporting a bill to change the penalty for assaulting a law enforcement officer in Virginia. The same legislation has been criticized by some who fear lessening the stakes sends the wrong message about how the public should treat police.

The bill passed in the Senate but was killed by the Democrat-led House Courts of Justice Committee on Tuesday, disappointing advocates who say this change can't wait any longer.

It’s impossible to tell without a test. Influenza and COVID-19 have such similar symptoms, you may need to get tested to know what's making you miserable.

The State Fair of Texas: Weird Things You Never Knew