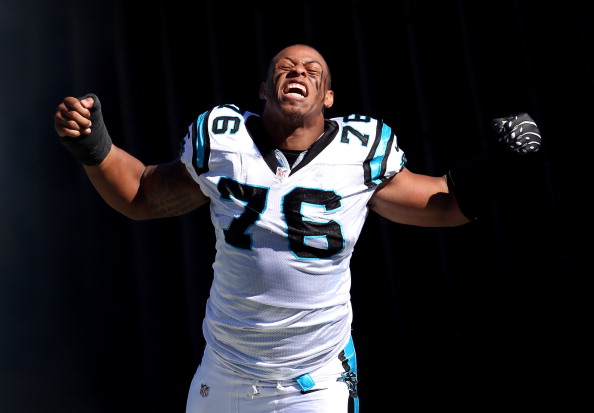 NFL commissioner Roger Goodell issued this statement in regards to the punishment:

“The NFL’s investigation concluded that Hardy violated the Personal Conduct Policy by using physical force against Nicole Holder in at least four instances.

The net effect of these acts was that Ms. Holder was severely traumatized and sustained a range of injuries, including bruises and scratches on her neck, shoulders, upper chest, back, arms and feet. The use of physical force under the circumstances present here, against a woman substantially smaller than you and in the presence of powerful, military-style assault weapons, constitutes a significant act of violence in violation of the Personal Conduct Policy.”

Hardy played for the Carolina Panthers at the time of the allegations and was actually convicted. But he appealed and received a new trial. Holder refused to cooperate the second time around, and the charges were dropped.

Dallas signed Hardy last month after being released by the Panthers.

Hardy has three days to appeal the NFL’s decision.

WASHINGTON (AP) — Undeterred by curfews, protesters streamed back into the nation's streets Tuesday, hours after President Donald Trump pressed governors to put down the violence set off by George Floyd's death and demanded that New York call up the National Guard to stop the “lowlifes and losers.”

President Trump cites Dallas attack in call for governors to crack down on protests, leaves out victim had a machete