FRISCO -- The Dallas Cowboys parted ways with wide receiver Dez Bryant on Friday after eight seasons together, and Bryant did not take kindly to the news.

The combination of Bryant's declining production and $12.5 million salary for this season (which would have counted $16.5 million against the salary cap) was the most obvious problem, however he was reportedly not even offered a pay cut to remain on the team.

Previous quotes from some Cowboys decision-makers indicate Bryant's sideline and locker room antics, referred to as merely "passion" in happier times, were factors in the decision, which will save the Cowboys $8 million in cap space this season.

Bryant leaves the Cowboys as the franchise's career leader in receiving touchdowns with 73.  He also ranks third all-time with 531 catches and fifth with 7,459 receiving yards.

As an organization we hold Dez Bryant in the highest regard, and we are grateful for his passion, spirit and contributions to this team for the past eight years. He will always be a valued member of our family.

Dez and I share a personal and professional relationship that is very strong, and he is one of just a handful of players with whom I have become that close to over the past 30 years.

This was not an easy decision. It was made based upon doing what we believe is in the best interest of the Dallas Cowboys.

We arrived at this crossroad collectively with input from several voices within the organization. Ultimately we determined it was time to go in a new direction.

Bryant took issue with the "several voices" part, indicating he knew which voices were against him, and insinuated he might try to sign with an NFC East rival in order to have two chances at revenge each season. 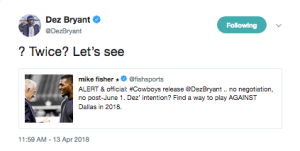 So where will Dez end up?

COLLEGE STATION, Texas (KXAN) -- The Texas A&M University community mourns as it loses one of its young cadets.

The Texas A&M Corps of Cadets Commandant announced Wednesday that Ryan Boles, a Boerne native, had passed away.

WASHINGTON (Nexstar) — In his first week in office, President Joe Biden has signed more than two dozen executive orders. Many of Biden's policies reversed what the Trump administration put into place regarding immigration.

But Biden's ambitious immigration agenda hit its first hurdle on Tuesday, when a Texas federal judge temporarily blocked the 100-day deportation freeze Biden signed on his first day in office.