The Cincinnati Zoo shot and killed a western lowland gorilla on Saturday after a 4-year-old boy slipped into the animal’s enclosure, a zoo official said at a news conference. 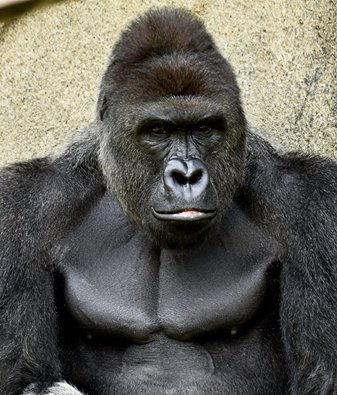 Harambe, a 17-year-old, 400-pound gorilla, dragged the boy around its habitat for about 10 minutes in what the zoo’s dangerous animal response team considered a life-threatening situation, Cincinnati Zoo Director Thane Maynard at a press briefing.

After the gorilla was shot with a rifle, the child was taken to Cincinnati Children’s Hospital with non-life-threatening injuries, CNN affiliate WKRC reported.

Maynard said it appeared the boy went under the rail, through wires and over the moat wall.

Two female gorillas were called out of the habitat, Thane said, but the male gorilla went to the moat, picked up the child and began dragging him around the enclosure.

“The child was not under attack but all sorts of things could happen,” Thane said. “He certainly was at risk.”

Thane said zoo officials decided against shooting Harambe with a tranquilizer because the drug takes effect too slowly.

“You don’t hit him and he falls over,” Thane said. “It takes a few minutes.”

Thane said the zoo security team’s quick response saved the boy’s life but all the zoo employees are devastated at losing a rare species.

The western lowland gorilla is a critically endangered species, according to the World Wildlife Fund’s webpage. In the wild, they can be found in Cameroon, the Central African Republic, the Democratic Republic of Congo and Equatorial Guinea.

Harambe, who turned 17 on Friday, was born at the Gladys Porter Zoo in Brownsville, Texas, Thane said. The zoo hoped he would eventually father other gorillas.

Morning After takes a look at some funny live TV bloopers in our very first edition of Morning After REACTS! Who better to comment on the misfortunes of live television than our very own Ron Corning, Jenny Anchondo and Yolonda Williams!

COLUMBUS, Ohio (WCMH) - Joe Kovacs is the reigning Olympic silver medalist in the shot put. He's also a favorite for another medal in Tokyo.

From the weight room to the throwing circle to the kitchen, it's hard to find Joe without his wife, Ashley too far away.

(ABC4) -- The COVID-19 pandemic has, in the words of Greg Skordas, a lawyer in Salt Lake City, "created all kinds of special circumstances and special exceptions to the rules that we've always considered in employer and employee relationships."