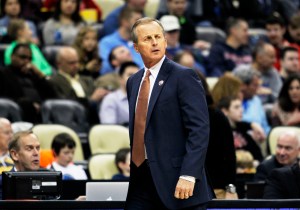 AUSTIN – A basketball coach with the most wins in school history has been sent packing. That’s right; Rick Barnes is getting booted from the land of burnt orange, and like a true longhorn, he’s being put out to pasture.

In 17 years, Barnes compiled over 400 wins, won three Big 12 championships, and reached the NCAA tournament in each of his first 14 seasons. He also propelled Texas to its first number one ranking in school history. The one thing missing from Rick’s resume? A national title.

After backing into the tournament this year, then being eliminated in the round of 64, things weren’t necessarily looking up. One of the more heartfelt reactions came from one of Rick`s former players, T.J. Ford.

Ford credited Barnes with putting Texas basketball on the map and making him the number one player in the world. He continued by describing their bond as unbreakable.

So now that Barnes is out, who’s in? Some names being thrown in the hat as possible replacements are VCU head coach Shaka Smart and Wichita State coach Gregg Marshall.

One thing’s for sure: Whoever ends up taking the helm will have some big shoes to fill and some high expectations to live up to. The University of Texas is making it clear: Historic accomplishments aren’t enough. In Austin, it’s all about championships. Let`s see who’s up to the task.