HOUSTON — Just six months ago, he skydived on his 90th birthday. 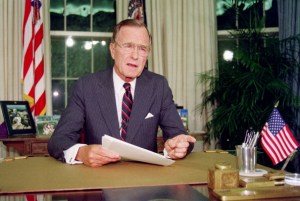 But for the 41st President of the United States, frailty has become prevalent. And When George H.W. Bush makes a hospital visit, it’s news.

President Bush is being treated at Houston Methodist Hospital for “shortness of breath.”

Bush’s ambulance ride to Methodist came as Barbara Bush made an appearance Tuesday night at the Hobby Center reading “Twas the Night Before Christmas” with J.J. Watt.

Two years ago, the former president spent the holidays in the hospital. A respiratory illness caused a presidential-sized scare.

This time around, it appears Bush’s medical woes are not as serious as last time.

Before becoming President, Bush “senior” served as vice president under Ronald Reagan. He is also a former Navy pilot and flew 58 combat missions in World War II in the Pacific.

Bush was shot down once but was rescued by U.S. sailors, according to his White House biography. He received the Distinguished Flying Cross.

Bush became known for his declaration that the United States should become “a kinder and gentler nation.”

Why the pandemic is creating plastic surgery trends