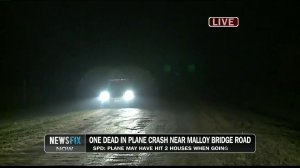 SEAGOVILLE, Texas—“It’s not something you’d expect to have happen right in the middle of cooking dinner…having a plane crash next to you,” Seagoville resident Fred Baugh said.

But it did.  After 6 o’clock Thursday evening, a small plane crashed near this Seagoville house.  The pilot—killed.

The flight pattern on Flight Aware showed multiple loops before the terrible crash.  Now, these neighbors are left picking up the pieces.

“Heard an airplane engine..very loud. We immediately started running outside, and I heard an impact that I thought was something hitting my roof,” Baugh said.  “[I think] it was the actual shockwave from the plane hitting.”

You can still see pieces of the red, white, and blue plane next to this barn.

“When it hit, one of the horses panicked and jumped through the fence.  So the horse had a gash on its side.  So my daughter went up there, holding on to this horse, and trying to calm it.”

Nothing could prepare his 14-year-old daughter for what saw next.

“The pilot had been killed instantly…It was body parts, and she had to stand next to it for a long time.  She had kind of a traumatic night.  She handled it really well,” Baugh explained.

The FAA says the plane lost contact about 5 miles south of the Mesquite Municipal airport. Although none of these houses were damaged, there is no happy ending.

“It didn’t make any smoke, spark…or anything,” Baugh said.  “After that, completely dark and completely silent.”

SEAGOVILLE, TX -- Seagoville Police are investigating a deadly plane crash on 1600 block of Bent Tree St. Police say one person is dead. It is unknown, at this time, how many occupants were in the single-engine plane.

According to the FAA, the plane took off from Mesquite Municipal Airport Thursday evening, but lost contact near Malloy Bridge Road, some five miles south of the airport.

Initial reports from Seagoville cops at the scene is the plan hit two houses when it crashed. A wheel was reportedly found in a filed near Bent Tree Street; that's where the accident happened.