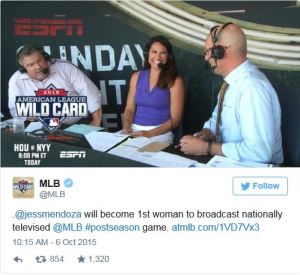 NEW YORK, NY- On Tuesday night, the Houston Astros pulled an impressive 3-0 win over the New York Yankees during the American League Wild Card Game, but what might have been more impressive was the commentary.

ESPN analyst Jessica Mendoza proved that girls can do it just as well as the boys.  She made history as the first woman to broadcast a nationally televised MLB playoff game.

She joined Jon Kruk and Dan Shulman in the booth at Yankee Stadium, providing color commentary throughout the game.

“Praise to #jessicamendoza for giving hope to every girl who loves baseball.”

But the colorful comments on Twitter seem to have set us back to pre-woman’s suffrage movement.

Comments like “We watch sports to get away from women.”

“I’ve been trending for all the wrong reasons tonight. I apologize for calling Jessica Mendoza T**s Mcgee.”

Well, needless to say, that didn’t sit well with folks. He’s been suspended and the Atlanta Falcons even tweeted their disapproval.

But former softball slugger Mendoza has two Olympic gold medals to her name and it doesn’t look like she’s letting the haters get to her.

All we have to say is go on with your bad self, Jessica!

No beach this year? Chef Uno’s Mai Tai Sangria will get you a bit closer to the tropics