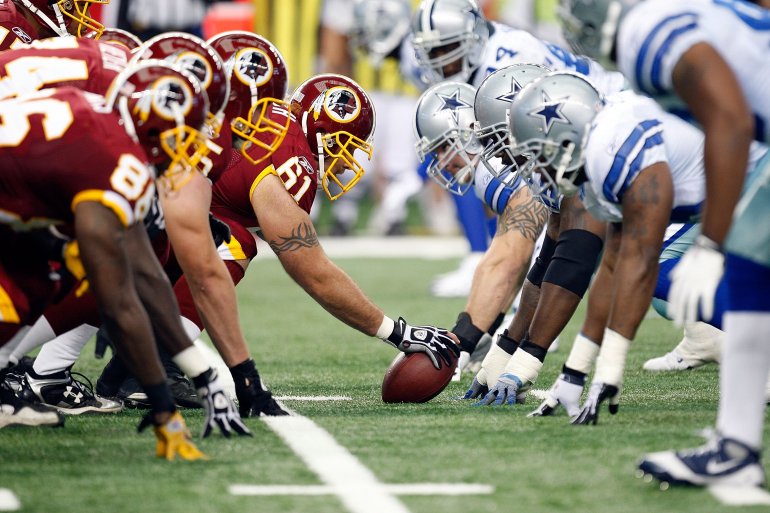 FRISCO, TX — It’s Redskins week for the Dallas Cowboys! And while the hatred between these two old rivals may have died down a bit since the good ole’ days, this Sunday’s showdown is huge.

Dallas and Washington are tied at 3-3 right now, and with Philly already at 6-1, the loser of this game may have to kiss any hope of winning the division good bye.

“The division is good, the division is talented, we know how good this Redskins team is,” quarterback Dak Prescott said. “We definitely don’t worry about records, obviously with ourselves, so we’re not worried about that. This is an in division team, in division rivalry and we know what they’re going to do and they know what we’re going to do, and it’s going to be a great matchup.”

“I think we have the right kind of guys, the young guys are going about it the right way and I think they’re learning from their experiences,” Garrett said. “I think we’re certainly better than we were a month and a half ago.”

Well they’ll need to ball out in DC on Sunday, or else their playoff hopes might take a huge hit.

New Zealand, Fiji, and Taiwan are among a handful of nations worldwide that have managed to last 100 days without a recorded case of COVID-19 through community transmission.

On Sunday New Zealand marked 100 days without community transmission of COVID-19, according to the New Zealand Ministry of Health.

The latest Covid-19 milestone is being described as something to celebrate but comes with a warning that New Zealand can't afford to let its guard down, according to Radio New Zealand.

“Achieving 100 days without community transmission is a significant milestone, however, as we all know, we can’t afford to be complacent," said Director-General of Health Dr Ashley Bloomfield. “We have seen overseas how quickly the virus can re-emerge and spread in places where it was previously under control, and we need to be prepared to quickly stamp out any future cases in New Zealand.

From the first known case in New Zealand on February 26 to the last case of community transmission detected on May 1, elimination took 65 days, according to the New Zealand Herald. New Zealand’s number of confirmed cases of COVID-19 remains at 1,219.

In a statement, the Health Ministry said there were still 23 active cases of the coronavirus in managed isolation facilities.

New Zealand relied on three types of measures to get rid of the virus including lockdown and social distancing to stop community transmission, border controls to stop the virus from entering the country, as well as case-based controls using testing, contact tracing, and quarantine.

Currently, New Zealand and Fiji are among the only countries to go 100 days or more without cases, according to Prime Minister of Fiji Frank Bainimarama.

The fire broke out shortly before 7:30 p.m. Sunday evening at 22 Chuckwagon Drive in Lake Luzerne. Rachel Ray and her family members were home at the time.