The shrine is a major tourist attraction, particularly among Chinese. China’s state-run media say three of its citizens died in the blast.

No one has claimed responsibility for the bombing. 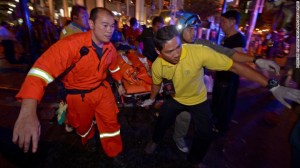 Police say an improvised device attached to a motorcycle went off around 7 p.m. local time in an area with numerous hotels and shopping centers, including one of the largest shopping malls in the world.

Local media say about 6.5 pounds of TNT were inside a pipe. Police found an electronic circuit used in the blast about 30 yards away.

Bangkok has not had an attack of this size.

Each day, thousands of worshipers visit the shrine that houses a golden statue of the Hindu god of creation. They make ceremonial offerings ranging from floral garlands to teakwood elephants. And they pray for everything from sports results to good health.

But tonight, their prayers are of a different nature, for the dead and for the injured, victims of terror at the shrine of creation.