COMMERCE, TX – The winner of Miss Black Texas 2016 says she was harassed, unlawfully arrested, and detained by a North Texas police chief. If that’s not bad enough, she also says he called her a “black b*tch.”

Police brutality and Abuse of Power from a Police Chief. Let me talk to my lawyer and I'll fill y'all in #blacklivesmatter

According to Ponder, she was on her way to Walmart when she encountered a black truck driving erratically in front of her. She says she decided to pass the vehicle to avoid potential danger because she believed the driver to be drunk.

She realized the vehicle had followed her after parking her car outside of Walmart. Crews, who allegedly identified himself as police, yelled at her for passing his 14-year-old daughter who was learning how to drive at the time.

Ponder reminded Crews that it’s illegal for a 14-year-old to drive, leading Crews to allegedly call Ponder a “black b*tch.”

After the confrontation, Ponder entered Walmart, purchased her items, and headed back to her vehicle when Crews, his daughter, and another man confronted her.

According to Ponder, the man informed her that Crews was a police chief and suggested that she apologize to him. Ponder refused and called the police.

When police arrived on the scene, the man who approached Ponder allegedly told them that she was resisting arrest and instructed police to arrest her.

Ponder was arrested and detained for 24 hours. She was charged with evading arrest.

Ponder is calling for her charges to be dropped, Crews to be fired, and disciplinary action for other involved officers. 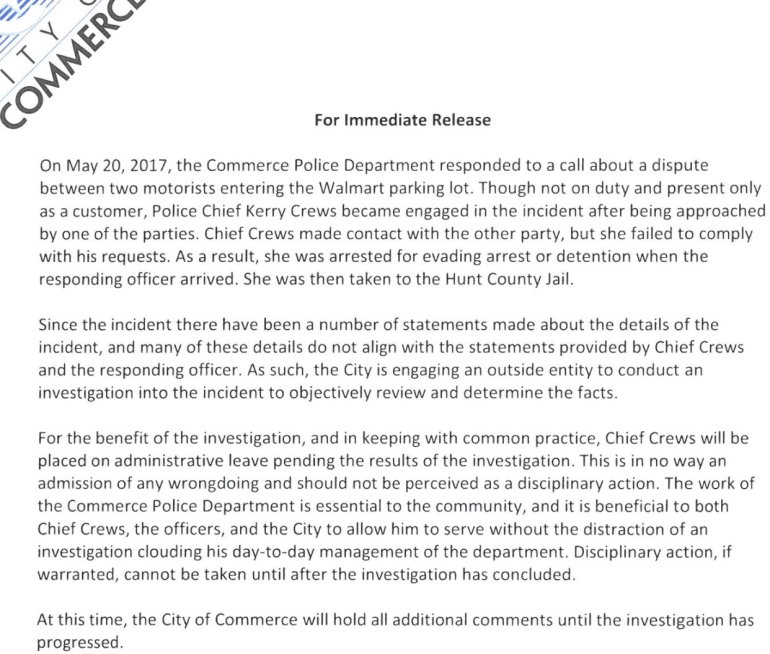 It seems we have a classic “he said, she said” situation on our hands.

AUSTIN (KXAN) -- Shaka Smart's Texas Longhorns will get an unexpected week off the Big 12 schedule as college basketball attempts to play its season during the COVID-19 pandemic.

The Texas at TCU game scheduled for Saturday, Jan. 23 has been postponed, according to Texas Athletics. The Longhorns' Wednesday road game at Iowa State was also postponed due to COVID-19. Iowa State has paused all team activities.

DALLAS (AP) — Texas reports more than 10,000 new cases of COVID-19 and 46 more deaths from the disease caused by the novel coronavirus.

The number of Texans hospitalized with COVID-19 rose to 13,858 Monday.

The variant, called L452R, is distinct from those previously identified in the U.K., Brazil and South Africa.

Woman ruled dead in 2017 fights to be declared alive