NICE AIPORT, France - Europe's budget airline EasyJet flew into a storm Sunday after it confirmed a member of the ground staff at Nice airport in France had punched one of its passengers in the face while he was holding a baby.

The victim was due to travel on EasyJet flight 2122 from Nice to Luton airport outside London on Saturday. The flight was delayed for a grueling 11 hours. EasyJet says the airport employee does not work for the airline.

"It was awful the whole thing. I just can't believe people can behave like that," said fellow passenger Arabella Arkwright, 49, who photographed the altercation.

She told CNN it was her husband who restrained the attacker while they waited for police to arrive. The man was taken away, infant in arms, but was later let back on the flight in time for its eventual takeoff. Arkwright said he had a mark from the punch on his face.

"We had a serious problem with someone of staff from our subcontractor Samsic," Jean-François Guitard, a director at Nice airport told CNN.

He said the passenger had complained about the EasyJet delay to a Samsic employee. Unable to answer the passenger's questions, the employee suddenly lashed out with a punch.

Guitard said that the airport had been in contact with Samsic, which told them the employee had been suspended. "Clearly it is a misconduct situation. We apologize strongly about this situation regarding this passenger. There is no reason for a staff member to fight a passenger," Guitard said. 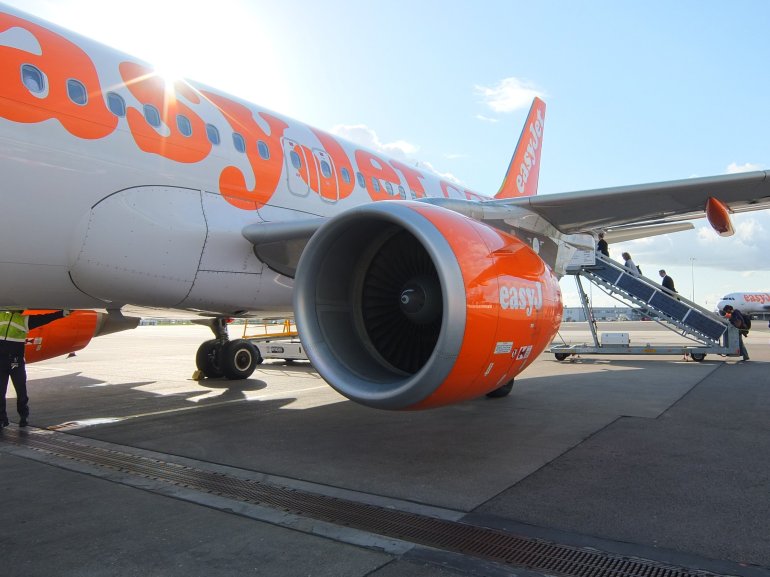 "EasyJet is very concerned to see this picture and can confirm the person in the photo is not an EasyJet member of staff and they do not work for EasyJet's ground handling agents in Nice," the airline said in a statement.

"We are urgently taking this up with Nice Airport and their special assistance provider Samsic who we understand the person photographed works for."

The airline said it was sorry for the flight delay, which it said was due to a technical problem. Another aircraft had to be flown over from London.

"Passengers were provided with updates and refreshment vouchers during this time and the flight landed in London Luton last night," the airline said.