DALLAS — When it comes to the Cowboys, it seems like they spend as much time in the courtroom as they do in Jerry World. 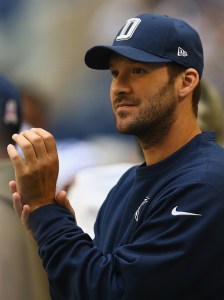 Now another player on America’s Team is heading to court. We’re talking about superstar Tony Romo.

Romo was planning to throw a National Fantasy Football Convention in Las Vegas earlier this month. But at the last minute, the NFL pulled the plug citing the league’s strict policy that prohibits players from associating with any gambling-related establishments.

Now the company Romo co-owns, Fan Expo LLC, has filed a lawsuit against the NFL asking for $1 million in damages.

Fan Expo accuses the NFL of blatant and premeditated sabotage saying they illegally interfered by threatening to fine the high-profile players scheduled to appear at the convention.

The suit says intimidating threats were even relayed to the players’ parents. The NFL told NewsFix Wednesday they are “reviewing the suit and will respond accordingly.”

Looks like Romo will be looking for the win on the field and in court this season.