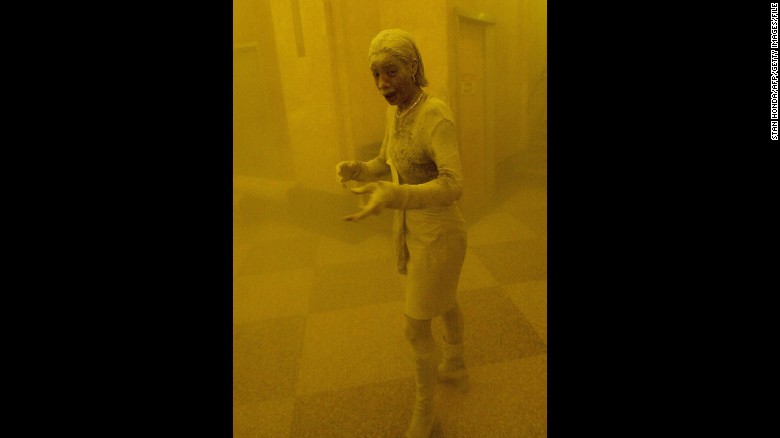 NEW YORK — Many remember the haunting photograph: A woman wearing business attire and pearls is covered head-to-toe in white dust, her hands held out helplessly before her, as she makes her way out of the World Trade Center’s damaged North Tower on September 11, 2001.

She survived that day, getting out before both towers of the trade center crumbled and killed 2,753 people in the deadliest terror attack on U.S. soil.

But the woman in the photos, known to most as the “Dust Lady,” died Tuesday, her family said. Marcy Borders was 42. She had been battling stomach cancer since last year, daughter Noelle Borders told CNN.

“My mom fought enemies in battle and I just loved her so much,” Borders said in a phone interview. “She will always live through me.”

Family members mourned the mother of two on Facebook.

“I can’t believe my sister is gone,” Michael Borders, her brother, posted.

“We lost our very own hero,” her cousin Elnardo Borders wrote.

Borders was 28, working as a legal assistant at Bank of America in the North Tower of the World Trade Center, when planes hijacked by terrorists struck.

Freelance photographer Stan Honda took the famous photograph as Borders escaped the collapsing building through a cloud of dust.

“It wasn’t like it was one of the best images you would want to view out in the world,” she told CNN in an interview six months after the attacks. “Just looking at it just shows how much fear.”

Borders battled depression and drug addiction following the attacks, the Jersey Journal reported, but she checked into rehab in 2011 and found sobriety.

She had recently found work again as well — on a local political campaign in her native New Jersey — when she was diagnosed with cancer, according to the paper.

“How do you go from being healthy to waking up the next day with cancer?” she said in an interview with the Jersey Journal. “I’m saying to myself, ‘Did this thing (the towers’ collapse) ignite cancer cells in me?'”

“I definitely believe it because I haven’t had any illnesses,” she told the paper.

ST. LOUIS, Mo. (KTVI) - WWE star and actor Dwayne "The Rock" Johnson is part of a group that has purchased the XFL for $15 million, according to Variety’s sister site Sportico. He is splitting the cost of the league with RedBird Capital investor Gerry Cardinale.

"With gratitude and passion, I’ve built a career with my own two hands and will apply these callouses to our XFL brand,"Johnson tweeted shortly after the announcement. "Excited to create something special for the fans!"

U.S. health officials are warning that the nation is entering a new phase of the pandemic, as COVID-19 cases continue to spread in urban and rural areas.

Some officials fear the U.S. still doesn't have a grasp on the pandemic.

An Atlanta-area community is rallying around a teenager who lost both of his parents to COVID-19 just days apart, WSB reports.

"We were a regular family just trying to stay safe during this pandemic,” said 17-year-old Justin Hunter.

Engaged around Valentine’s Day, Michigan couple in their 80s marry

After years of revival, seven businesses have shut down for good in Fort Worth’s Sundance Square

Addiction in Isolation: Recovery can be a struggle in quarantine, but Chris Beckman hares how people can cope

The end of the Ellen era? Backlash towards Ellen DeGeneres could result in the ending of the show

After years of revival, seven businesses have shut down for good in Fort Worth’s Sundance Square

Addiction in Isolation: Recovery can be a struggle in quarantine, but Chris Beckman hares how people can cope