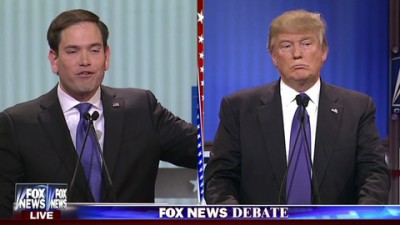 Regardless of your political affiliation, you’ve got to admit last nights debate was, well, one for the history books. Republicans began their debate Thursday night with insults and ended with three candidates pledging to back Donald Trump should he win the nomination.

Minutes into the debate, Trump was boasting about the size of his penis.

Clearly annoyed that Rubio had joked days ago about the size of Trump’s hands — suggesting, as Trump put it, that “if they’re small, something else might be small” — the Republican front-runner made a claim seldom heard during a presidential debate.

It was a PG-13 start to a two-hour food fight that parents wouldn’t have wanted their kids to watch.

Early on, as Rubio pressed Trump for more policy details, the two gave each other nicknames. “Don’t worry about it, Little Marco,” Trump said, to which Rubio responded, “Let’s hear it, Big Donald.”

Trump said Florida wouldn’t elect Rubio dogcatcher after all of his missed Senate votes. Cruz gave Trump instructions on letting go of his anger: “Donald, learn not to interrupt, it’s not complicated. Count to 10, Donald. Count to 10. Count to 10.”

Later, when Cruz told Trump to “breathe,” Rubio jumped in and joked that the two were doing yoga.

“I really hope that we don’t see yoga on this stage,” Cruz answered.

And then Rubio pointed to Trump, who’d just admitted his flexibility on policies, and said: “Well he’s very flexible, so you never know.”

The Republican candidates put on a show — but not the type they’d like to play for a general election audience. CNN analyst Amanda Carpenter called it “embarrassing.” And pollster Frank Luntz tweeted that 22 of 25 participants in the focus group he led Thursday night predicted the debate would hurt the GOP’s chances in November. “This has to stop. Seriously,” he tweeted.

It seemed as if Fox News had grown tired of Trump’s opponents’ inability to knock him down — so the moderators decided to do it themselves.

When Trump tried to claim he’d close the gap by negotiating better drug prices through Medicare, a constant talking point of his, Wallace had a second graphic already prepped pointing out that, too, wouldn’t get Trump even close to eliminating the deficit. CNN’s Reality Check team agrees on that point.

It forced an awkward and unspecific claim about “other things” out of Trump.

Megyn Kelly took her shot later on, setting up three clips of Trump taking one policy position and then, days later, taking the opposite position.

Trump was unmoored, insisting he had logical explanations about his reversals on Syrian refugees, the war in Afghanistan and more — and that by the way, it doesn’t matter much anyway.

“You have to have a certain degree of flexibility,” he said.

Ted Cruz needs Trump’s momentum to ebb as much as anyone, but he didn’t spend much of the night on the attack. For the most part, Cruz stood aside and watched Rubio and Trump rip each other to shreds, and then turned to the audience and threw up his hands.

“Megyn, let me just ask the voters at home: Is this the debate you want playing out in the general election?” he said.

Cruz took his shots at Trump, too, but he let Rubio do the dirty work — betting that he, rather than the Florida senator, will reap the benefits.

Rubio, for instance, built on the attack line Mitt Romney started earlier in the day regarding Trump University, pressing Trump over and over to admit he was ripping off the people who paid $36,000 for his courses at a school that’s now the subject of a class-action lawsuit.

Cruz is trying to co-opt the angry electorate that Trump has tapped into, and his pitch is simple: Trump is the villain you’ve been mad at.

“For 40 years, Donald has been part of the corruption in Washington that you’re angry about,” he said.

It’s entirely possible that the debate did nothing to change Cruz’s fortunes. But he does have a big opportunity on the horizon.

Of the four states to only allow Republicans to vote in GOP nominating contests, Cruz has won three, thanks to his strength among conservatives and the rules limiting Trump’s ability to expand the electorate. And all four states set to vote Saturday — Kansas, Kentucky, Louisiana and Maine — have closed contests.

Kasich will not, under any circumstances, engage directly with his foes on the debate stage.

“As the Democrats tell me all the time, I can get the crossover votes,” he boasted early in the debate, adding that he’s often told at town halls that he seems to be “the adult on stage.”

“I’ve talked about issues. I have never tried to go and get into these kinda scrums that we’re seeing here,” he said.

He demonstrated his experience on economic and budgetary challenges and foreign policy, and showed no signs of backing out of the race anytime soon — especially not before Ohio’s March 15 primary.

For Rubio, that’s all a big problem.

The man who won the hearts of the Republican establishment by confronting Trump head-on in the last debate was ready to hit the billionaire again and again — but a 1-for-11 Super Tuesday intervened, and some of the shine wore off.

He confronted Trump once again, baiting the business mogul by calling him names, attacking his business ventures and accusing him of knowing nothing about policy — even though he struggled with a raspy voice.

On the campaign trail, Trump has proposed changing U.S. libel laws so that politicians can more easily sue journalists.

But on Thursday night, Trump said the bond between reporters and politicians who agree to go off-the-record is too strong to break. That, he said, is why he won’t ask The New York Times to release a transcript or recording of an off-the-record conversation he had with the newspaper’s editorial board about immigration.

“I think being off the record is very important. I will honor it,” he said.

Then, Trump allowed — as his foes claimed — that he might have softened his the hard-line stance he has taken on the campaign trail that he will build a wall on the U.S.-Mexico border and deport 11 million undocumented immigrants.

“I will say that in immigration as well as with anything else, there has to be tug and pull. You have to be able to have some flexibility,” he said. “I may have said something like that with The New York Times. But I am not going to release something off the record.”

Trump’s opponents pounced on his remark, but they could be misreading his support. Many Trump backers say they know he can’t achieve everything he proposes, but believe he’ll fight for it more effectively than anyone else.

In an interview with CNN’s Dana Bash afterward, he defended that flexibility, saying: “I’m flexible with everything. You can’t just say, ‘this is it and I’m never going to talk,'” he said. “With that being said, you have to make great deals.”

Sticking to the pledge

Coming less than 12 hours after Mitt Romney launched a scathing broadside against Trump, the candidates’ answer to the last question of the debate was particularly striking.

Fox News moderators asked Rubio, Cruz and Kasich whether they’d back Trump if he wins the nomination.

The moment won’t help Rubio — who had joined the #NeverTrump movement of Republicans vowing not to support Trump on Twitter last week — with that crowd.

More important, though, is what they didn’t say.

The premise of the question was that Trump had already won the nomination. But there are scenarios in which Republicans could have more chances to stop that from happening, even after all 50 states vote.

Romney is angling for a floor fight at the Republican National Convention in Cleveland in July. And none of the candidates said they wouldn’t fight it out at a contested convention.

A better question: Would the Republican field support the candidate who wins the most delegates?

So what does this change?

Trump struggled with policy details, butted in when other candidates were speaking and sparred with the moderators.

So what else is new?

His sharp, and sharply personal, exchanges with his rivals might have been amped up Thursday night, but still sounded much like Trump’s first 10 debates.

The front-runner doesn’t get rattled or lose his wit, even when he is under attack from everyone else on stage. He often seems to relish it — as if his foes’ criticism gives him an excuse to stop holding back.

None of the debates so far have changed the trajectory of the race — in part because Trump is the master of the debate post-game, finding ways to deflect weak points and suck up media oxygen while branding his foes with nicknames like “Little Marco” and “Lyin’ Ted” and claiming victory — no matter what happened.

Mood Food: As more Americans report struggles with depression, food is one area that could help