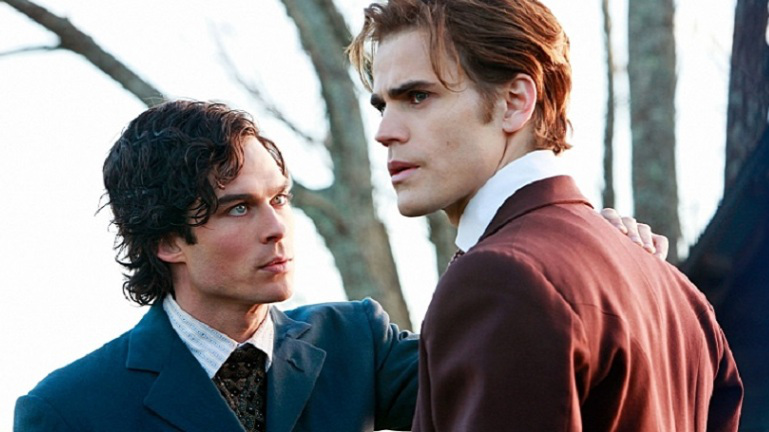 It’s true that Stefan “hero hair” Salvatore is the brother best known for saving the day on “The Vampire Diaries,” but let’s not forget that Damon dusts off his cape sometimes too!

If you were in a life or death situation, and you could only call one Salvatore brother for help, I’m guessing it would probably be Stefan. Even though it would probably take longer for Siri to understand his name, especially if you know many Stephens or Stephanies, he has proven himself to be a much safer bet.

Unlike his baby brother, Damon isn’t always seen as a hero in “The Vampire Diaries.” In fact, he was first introduced to us as a villain! That being said, when it comes to the people he loves, Damon is more than capable of stepping up to the plate, and wielding his vampire powers for good.

Throughout “The Vampire Diaries” Season 7, Damon has been struggling to figure out who he is now that Elena is gone, and has made many selfish decisions along the way. Even Stefan, who counts on Damon more than anyone else, is beginning to lose faith in him.

Now that he’s out of his coffin and back among the living, Damon is finally realizing his mistakes and starting to make amends. We know that Stefan hasn’t forgiven him yet, but there is still hope for the elder Salvatore! There’s a reason that Stefan has depended on him so much, and that’s because of the times that he has come through in the past.

To remind ourselves of how good Damon can be, and how much he does care for his little brother, let’s take a look at some of the most significant times that he has saved Stefan, in one way or another. If someone can pass this list along to Stefan, it may do a lot for Damon’s case!

1. When Stefan was shot by Logan Fell

Before the Brotherhood of the Five came to town, the founding families had the vampire hunting market cornered in Mystic Falls. In “The Vampire Diaries” Season 1, episode 6, “Lost Girls,” Logan Fell was on the front lines of the council’s fight, and Stefan got on the wrong side of his wooden bullets while trying to help Vicki Donovan through her transition.

At this point in the series, Damon was still very much a villain. The only reason Stefan was in the cemetery with Vicki to begin with was because Damon turned her into a vampire, basically for his own amusement. Even so, Damon’s humanity shone through the moment Stefan was in danger. He rushed in to save his baby bro, saying “if anyone’s going to kill you, it’s going to be me.” Sure, it may not be the sweetest line Damon has ever said, but it was definitely a turning point, and a far cry from his vow to make Stefan’s life a living hell.

2. When Stefan was blackmailed by Klaus

So saving Stefan from his forced friendship with Klaus turned out to be pretty complicated. It wasn’t a task that Damon was able to accomplish alone, but he definitely put in the work. A lot of “The Vampire Diaries” Season 3 featured Damon trying to save Stefan. First from having to travel with Klaus, then from being compelled by Klaus, and finally from having his emotions turned off.

He does give up on him briefly, after Stefan killed Damon’s girlfriend, Andie (remember her? Probably not), but it wasn’t long before Damon was back to putting his life on the line to get Stefan back. Even though, in terms of his feelings for Elena, it was definitely in Damon’s best interest for Stefan to stay gone, he fought for his brother until he was fully back to himself.

3. When Stefan was on the ‘Other Side’

Probably the best example of Damon saving Stefan happened in “The Vampire Diaries” Season 5, episode 22, “Home.” Stefan was actually dead, and trapped on the “Other Side” which was quickly falling apart! In order for Bonnie to do the spell to get him back, somebody needed to trigger an explosion. In a completely unselfish move, Damon volunteered.

This is definitely the biggest sacrifice that Damon ever made for Stefan, and probably for anyone. Even though it wasn’t supposed to, this act did end up costing Damon his life. If you ever find yourself giving up on Damon, remember that he willingly sent himself into the flaming Mystic Grill so that Stefan could get his life back!

4. When Stefan’s humanity switch was off

There are more ways to save someone than just saving them from death. Every time Stefan comes out of a ripper phase, he experiences extreme guilt from everything he did when his humanity was off. Unfortunately, this actually happens quite frequently for Stefan, but there was one time in particular when Damon really stepped up to get Stefan’s humanity back.

In “The Vampire Diaries” Season 6, Stefan turned his humanity off in a strange attempt at helping Caroline. In season 6, episode 18, “I Could Never Love Like That,” Damon rescued Lily from the prison world for the sole purpose of saving Stefan from himself. He told her exactly what he would need to hear to let his emotions back in.

It may have been manipulative, but it highlighted a few great things about Damon and Stefan’s relationship. First of all, it showed how well Damon really does know Stefan. Even though they’ve been separated by distance and hatred for most of their lives, Damon still knows exactly what Stefan has needed from his mother his whole life.

It also served as a reminder that before Katherine came into their lives, Damon was just a normal, protective, older brother to Stefan. He shielded him through their mother’s neglect and her departure. Even though he gave up his traditional older brother role for a while, that will always be a huge part of who he is.

5. When Stefan was human

Marty Hammond really messed things up for Stefan in “The Vampire Diaries” Season 7, episode 17, “I Went to the Woods.” A drug addicted fugitive probably isn’t the best body to be tossed into in the middle of a blizzard. He was stuck in the middle of nowhere, freezing to death, with no hope of survival. That is, until the brother which, after so much hurt, he had finally given up on, came to his rescue.

Besides being one of the most touching Salvatore brother episodes in the whole series, Damon saving Stefan from death by hypothermia was a perfect example of Damon’s determination to do whatever it takes to save Stefan when it comes down to it!

WASHINGTON (AP) — President Joe Biden is set to announce a wide-ranging moratorium on new oil and gas leasing on U.S. lands and waters, as his administration moves quickly to reverse Trump administration policies on energy and the environment and address climate change.

Two people with knowledge of Biden’s plans outlined the proposed moratorium, which will be announced Wednesday. They asked not to be identified because the plan has not been made public; some details remain in flux.

Two doctors were found fatally shot in a building that NewsNation affiliate KXAN identified as Children’s Medical Group, a pediatric doctor’s office. One is believed to be a victim who worked at the office, while the other is being considered a suspect, KXAN reported.