The French scour Europe for a ringleader. Americans sour on refugees. And Earth get a dour report. It’s Thursday, and here are the 5 things you need to know to Get Up to Speed and Out the Door: 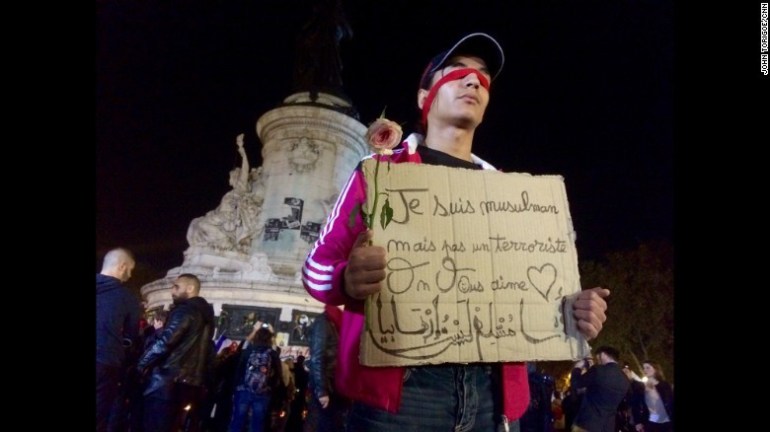 DOA or MIA: Where in the world is Abdelhamid Abaaoud, the suspected ringleader of the Paris attacks? Cops thought they had him cornered in an apartment building north of Paris yesterday. Five thousand rounds of ammunition and a suicide bomb blast later, the long standoff ended. But no Abaaoud. Next up: DNA tests on the body parts found in the rubble to figure out if he was even in the building. Abaaoud’s a pretty slippery fellow. Last month, the French targeted him in an airstrike in Syria. Same deal: No Abaaoud.

The group executed a Chinese and a Norwegian hostage. In September, it put up a picture of the two men with the words “FOR SALE.”

It posted a picture of the bomb it says brought down the Russian Metrojet plane. It’s a rigged soda can.

And it released a video warning of an attack on New York City. Said the mayor: You don’t scare us.

Divided we stand: Just what America needs. Yet another polarizing issue: refugees. A new poll finds 53% are opposed to Syrian refugees resettling in the U.S. Thirty-one governors say they won't roll out the welcome mat. And both the House and the Senate will hold hearings today. All because one of the Paris attackers may have slipped into Europe disguised as a refugee. President Barack Obama isn't budging. If Congress drafts an anti-refugee bill, he's threatened to pull out his mighty veto pen.

Birds of a feather: Did you know Boko Haram killed more people than ISIS last year (6,644 vs. 6,073)? And while our attention is focused squarely on Paris, this evil incarnate continues its murderous rampage. Two attacks in 24 hours in the Nigerian cities of Yola and Kano killed at least 40 people and wounded close to 200. What's more despicable: In one of them, Boko Haram used a bomber who was 11! Like ISIS, it too is a big fan of Islamic fundamentalism. In fact, the two groups accounted for 51% of all claimed terrorist killings in 2014.

Stop. Collaborate. And listen: Airport workers embraced their inner "Norma Rae" last night and have gone on strike, demanding medical benefits and $15-an-hour pay. If you're in Chicago, Boston, New York, Philadelphia or Fort Lauderdale, you'll probably see folks holding signs and chanting outside terminals this morning. Got a plane to catch? Don't worry, the airlines say your flight will leave on time. Which is a surprise, because they usually never do.

Highway to the danger zone: We've got bad news and really bad news. First the bad news: if the Earth's temperature goes up by just two degrees, we'll see more wildfires, more intense hurricanes, more species dying and shrinking water supplies. Now, the really bad news: We're almost already halfway there. The average temperature last month was a record-shattering 0.98 degrees Celsius warmer than average. In fact, last month was the warmest October ever. And on that note: Happy Thursday, y'all.

People are talking about these stories. Read up. Join in.

A member of a vandalized Texas mosque talking about 7-year-old Jack Swanson, who emptied out his piggy bank to help.

There goes our New Year's resolution

Craving a doughnut? Dunkin' Donuts will now deliver it to YOUR DOOR!

Mother of all selfies

Teach a man to fish and you feed him for a lifetime. Give a dad a GoPro and he shoots his entire Vegas vacation pointing it backward.

Next time, pick up a book

ISIS Books & Gifts in Denver keeps getting its sign vandalized because, you know, ISIS. If the idiots maybe read a little, they'd know ISIS is also the name of the Egyptian goddess of healing.

If you're thinking of dining at Damon Baehrel, you'll have to wait until 2025. The restaurant stopped accepting reservations in April 2014.

COLLEGE STATION, Texas (KXAN) -- The Texas A&M University community mourns as it loses one of its young cadets.

The Texas A&M Corps of Cadets Commandant announced Wednesday that Ryan Boles, a Boerne native, had passed away.

WASHINGTON (Nexstar) — In his first week in office, President Joe Biden has signed more than two dozen executive orders. Many of Biden's policies reversed what the Trump administration put into place regarding immigration.

But Biden's ambitious immigration agenda hit its first hurdle on Tuesday, when a Texas federal judge temporarily blocked the 100-day deportation freeze Biden signed on his first day in office.