WILMINGTON, Del. — Horrific and absolutely heartbreaking. A 16-year-old girl was beaten to death after getting jumped by a gang of girls in the restroom at her high school in Wilmington, Delaware.

She has been identified as Amy Inita Joyner-Francis, according to The News-Journal.

Students told WPVI — the fight was over a boy. That’s right — over a boy! Ridiculous.

“She was fighting a girl, and then that’s when all these other girls started banking her- like jumping her- and she hit her head on the sink,” Kayla Wilson said.

Even more disgusting, there are reports that other students recorded her death on cell phone cameras.

“I am so upset that a young lady lost her life today, things like that shouldn’t happen,” said Mayor Dennis Williams. “My heart bleeds for the family, the kids that go to this school, the administrators and this city.

Found in critical condition, Amy was rushed by police helicopter to the hospital where she died.

Police wouldn’t reveal any details of the case, but confirmed they are interviewing two female students believed to have been involved in the attack. 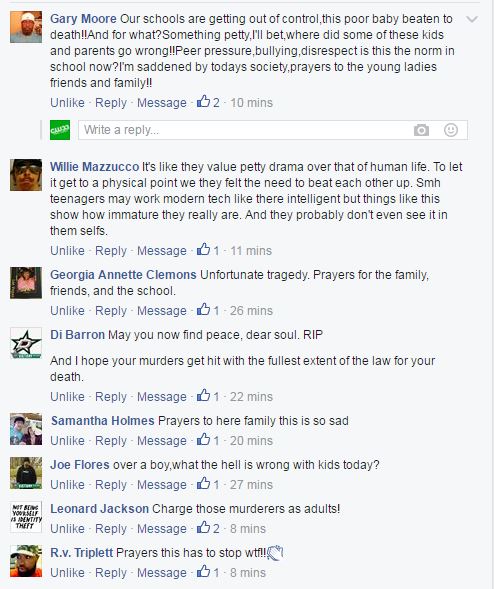 I am so sad & hurt by the young girl who lost her life at school today getting jumped. My heart is so heavy for her & her family #RipAmy

We live in a world where a 16 year old girl gets murdered by her classmates in a school bathroom while other classmates record it. #RIPAmy

fighting for boys is NEVER worth it, im disgusted by those petty high school girls who ended amy's life, they deserve life sentence #RIPAmy

This is the final weekend you can watch Jekyll & …