For most college graduates, the next step is usually an entry level job, hopefully in some proximity to the field they want to work in.

Not the most magical sounding experience, but it is what it is.

But for Giancarlo Bernini, it’s not.

Bernini, who graduated from UT Austin in May, is doing something magical, literally, in a big way.

“I started doing magic when I was in about fifth grade” he says “I would go to a local children’s cancer clinic and do magic for the patients in the lobby as they waited for treatment. That’s when I realized the impact magic could have on people.”

He continued to perform and hone his act and started doing shows in college, performing for fundraisers, teaching classes, and producing a street magic TV show for UT’s Student Network called “Beyond Illusion.”

It’s not all kid’s birthday parties for now – hardly a month out of college and Bernini’s already hitting the airwaves.

On Monday, June 17, Bernini will be featured on the season premiere of the CW’s Penn & Teller: Fool Us.

Bernini says “In January, I got the news that I was going to be on the show.  It was so thrilling!”

Being on the show isn’t about the 15-minutes of fame. It’s about a dream coming to fruition.

“Becoming a professional full time magician once seemed like a far-off dream” he says, “but being on Fool Us has been a huge encouragement to me in validating that this is something I can legitimately pursue and become successful at.”

His magic isn’t just about dazzling audiences, clever tricks of the hand and deceit. For Bernini, it’s actually about Truth.

“I define magic as something that presents discernment of Truth in a Beautiful way for the Good of the audience.  So Truth, Beauty, and Goodness are the three component ingredients to all the magic I do.  This is what I wanted to bring to Fool Us.”

Aside from nailing his first post-college gig, he does shows for colleges and corporate events.  He also specializes in doing magic for churches. You can find out more on his website, berninimagic.com 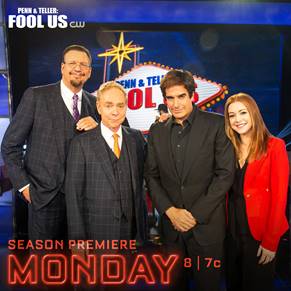 In response to COVID-19, the city of Dallas has decided to cancel the 41st Annual Dallas Mavs St. Patrick's Parade and Festival scheduled for Saturday, March 14.

While we were excited to broadcast the parade live from Greenville Avenue, the health and safety of our community is paramount.