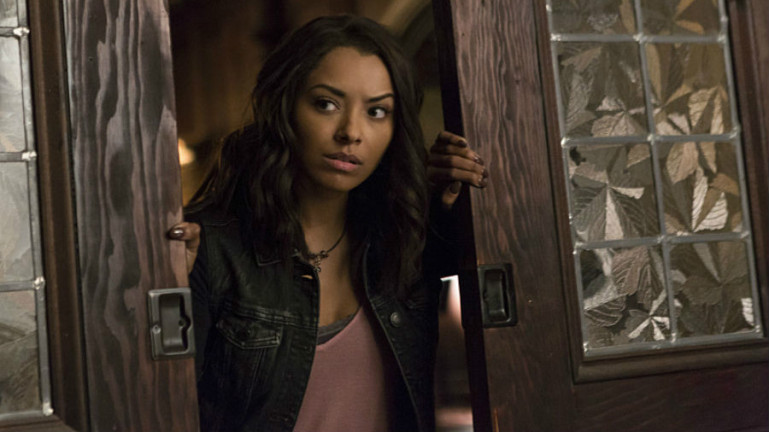 The topic of Bonnie’s (Kat Graham) sexuality on “The Vampire Diaries” has been up for debate for a while now, with more than a few fans speculating that she might be — and possibly should be — bisexual.

During a short but meaningful stretch of episodes in Season 7, Bonnie grew close to Nora (Scarlett Byrne), one of the new heretic characters who also happens to be one of the show’s first lesbians.

After all, the death of both Nora and Mary Louise means that LGBTQ representation on “The Vampire Diaries” just went from 2 characters to zero.

Rather than creating a new character to fill this void — who will no doubt be killed off eventually as most newcomers are — it might be time to mix it up and explore the sexuality of one of the main characters.

Kat Graham has long been an advocate of Bonnie being this character. At San Diego Comic Con 2015, when TV Line asked her about possible love interests Graham said, “I’ve pitched female witches. I’ve pitched that. I’ve pitched Bonnie having some discoveries sexually about herself. I’ve pitched everything.”

Season 7 didn’t seem to be taking that pitch anywhere until Bonnie’s relationship with Nora began to evolve, but that didn’t stop Graham from continuing the conversation.

RELATED: Who is getting killed off on ‘The Vampire Diaries?’

“I’ve been campaigning,” Graham tells The Wrap in regards to Bonnie’s possible bisexuality. “I just want to play a three-dimensional character. So whether the character is straight or bisexual or gay or trans or anything, it’s an honor to play a character that shows three-dimensional sides to her.”

Exploring Bonnie’s sexuality, wherever it may lead, could be the answer to quite a few “problems” on the show.

The “Bury Your Gays” trope that has been the source of heartbreak and anger for fans would almost certainly not apply to Bonnie, being that she is a main character and much less likely to die. Her death would also trigger the awakening of Elena, which would be tricky to pull off as long as Nina Dobrev plans to stay away.

The LGBTQ community would not only get a massive win in terms of representation, they would also have some security that their newly bisexual character is safe from death.

As much as Bamon fans adore the idea of Bonnie and Damon (Ian Somerhalder) exploring the romantic undertones of their relationship, the love story between Damon and Elena seems too deeply integrated into the narrative to explore another romance in a truly meaningful way. Giving Bonnie a female love interest could be a meaningful way to keep those fans engaged, while side-stepping a bigger issue.

“The Vampire Diaries” airs Fridays at 7 p.m. CT on The CW

DETROIT (AP) — Hertz announced Monday that it will buy 100,000 electric vehicles from Tesla, one of the largest purchases of battery-powered cars in history and the latest evidence of the nation's increasing commitment to EV technology.

The purchase by one of the world's leading rental car companies reflects its confidence that electric vehicles are gaining acceptance with environmentally minded consumers as an alternative to vehicles powered by petroleum-burning internal combustion engines.

Moderna said Monday that a low dose of its COVID-19 vaccine is safe and appears to work in 6- to 11-year-olds, as the manufacturer moves toward expanding shots to children.

Competitor Pfizer's kid-sized vaccine doses are closer to widespread use, undergoing evaluation by the Food and Drug Administration for nearly the same age group — starting at age 5. Its vaccine already is authorized for anyone 12 or older.

(AP) — The Facebook Papers project represents a unique collaboration among 17 American news organizations, including The Associated Press. Journalists from a variety of newsrooms worked together to gain access to thousands of pages of internal company documents obtained by Frances Haugen, the former Facebook product manager-turned-whistleblower.

The papers are redacted versions of disclosures that Haugen has made over several months to the Securities and Exchange Commission, alleging Facebook was prioritizing profits over safety and hiding its research from investors and the public.

The Family Place kicking off 10-day fundraising event on Oct. 29

Each state's favorite Halloween candy, according to online shopping data

The scariest part of Halloween may be costume contact lenses, eye doctor says

Mostly Cloudy Precip: 10%
Close
You have been added to Daily News Newsletter

Why homelessness is going up in Dallas (but down in Houston)

Sponsored Content: why healthcare is vital to your financial health