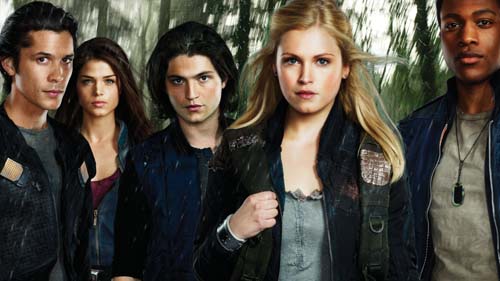 The 100 has always been known for its no-holds-barred way of portraying sexuality. The show is set 100 years in the future and according to creator Jason Rothenberg, sexual orientation will not be viewed the same way it is in 2016.

“It’s a different kind of world. In our world, I understand how important that is. In the world of the show, it’s more — it’s not about what your sexual orientation is, or what your gender is, if you’re disabled or not — it’s just are you strong or not,” Rothenberg told After Ellen when Season 3 premiered.

RELATED: 5 things to know about ‘The 100’s’ Becca, ALIE II and the night bleeders’ origin

But so far on the show, the only gay relationship shown has been Clarke (Eliza Taylor) and Lexa (Alycia Debnam-Carey) — that is, until the March 10 episode “Terms and Conditions.”

It’s been hinted at in several episodes this season that Miller (Jarod Joseph) and Bryan (Jonathan Whitesell) were a couple, but that was not confirmed until they kissed on screen in the episode. Fans were over the moon to see the two share a moment and are hoping for more, even if the two men are on opposite sides of the current Skaikru conflict, with Bryan siding with the dictator Pike (Michael Beach) and Miller siding with Kane (Henry Ian Cusick).

I was about to tweet that Miller and his boyfriend were cute.. But then he did that and now Miller deserves better #The100

I’m half watching #The100, but now I’m really worried about this new gay couple. Glad to finally see his bf.

BRYAN AND MILLER KISSED #The100

Crayola Experience is OPEN! Their NEW HOURS are 10 AM-4 PM daily. But before you visit, learn about their new GUEST PROTOCOLS so you can plan ahead.