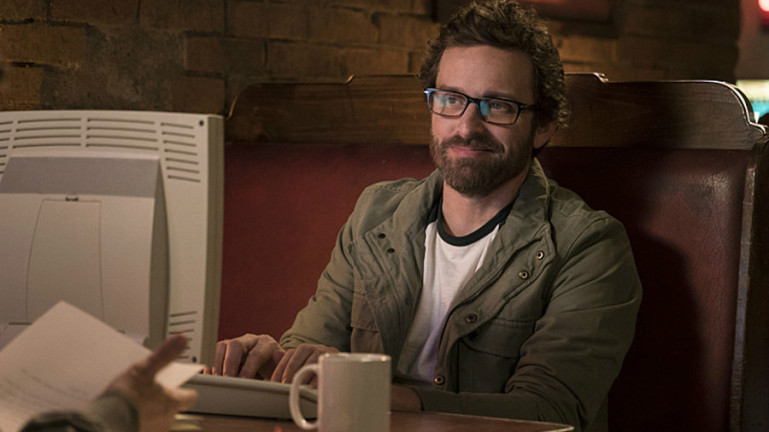 Over the course of its 11 season run, “Supernatural” has proven it’s at its best when serving the fans. At least one meta episode per season has found Sam (Jared Padalecki) and Dean (Jensen Ackles) running into everyone from the Ghostfacers to the Trickster, delivering some hilariously frightful goods in the process.

On Wednesday (May 4), the show that’s usually about these two hunky boys solving mysteries took an introspective and emotional turn as executive producer Robert Singer returned to helm the episode, “Don’t Call Me Shurley.”

It’s been a while since fans have heard from Carver Edlund/Chuck Shurley (Rob Benedict). The last time he was seen on the series was for a brief second in Season 10, after vanishing into thin air back five seasons prior. While not coming directly out to confirm he was in fact God, fans immediately began the speculation and after Wednesday’s show opened on Metatron (Curtis Armstrong) digging through a dumpster for food, it was soon revealed that you crafty SuperNatties — can we call you that, dear fans? — were absolutely right.

God has been gone for quite a while leaving the “Supernatural” world in chaos. While he’s been on his own galavanting around the planet while toying with Snapchat and a cat blog, it’s easy to tell early on in this rather David Mamet-style installment to the show, that Metatron and Carver/God/Chuck were to mend fences as an impossible soul searching mission commenced.

However disappointed God is with human nature, we see a softer side of Metatron as he pleads with his old friend to save his creation and stop his sister/Amara/The Darkness (Gracyn Shinyei) from bringing on the apocalypse.

Fan references were scattered throughout —  shout out to NBC’s “Revolution” —  but the heart of this story found a man seemingly jaded with his business, reflecting on his life through a tell-all memoir. Could this be Robert Singer’s final contribution to “Supernatural?” The man is a giant in the business and has had a huge, strong influence on the series since its inception. Heck, they even named a character after him!

RELATED: ‘Supernatural’: A werewolf, a gunshot, a suicide … oh my!

Whatever the case, the return of God sort of mirrored the return of Singer to the series. A quick look at his IMDB page finds his EP responsibilities coming to an end in 2015. Whether that’s a typo or fact, the return of one of the show’s key players resonated in one of the season’s more heartfelt, memorable episodes.

Always showing a fondness for classic rock, what better way to end the night than with Bob Dylan? By all accounts, it looks like God is back and some family drama is about to play out — all biblical-like.

“Supernatural” airs Wednesdays at 9 p.m. ET/PT on The CW.