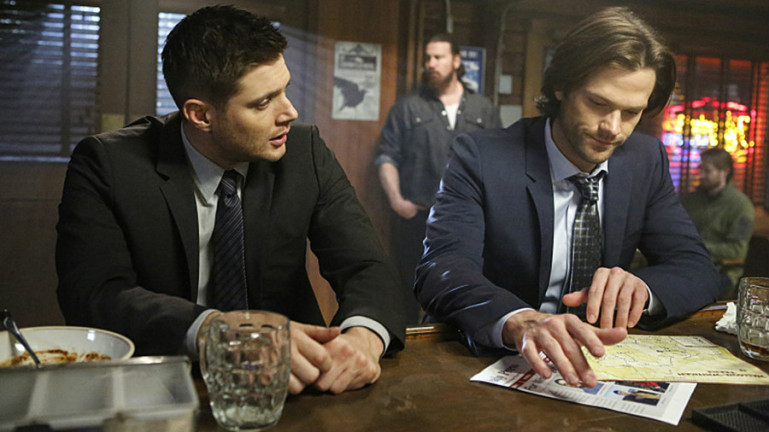 Any episode of “Supernatural” really isn’t complete without someone dying and over the past 11 seasons, Sam (Jared Padalecki) and Dean Winchester (Jensen Ackles) have had their fair share of visiting the after-life. Whether it’s Sam in Hell or Dean in Purgatory, our intrepid heroes always find their ways out of those hairy situations which makes Wednesday’s (March 30) episode, titled “Red Meat,” its own interesting ball of worms.

You see, while the story here follows the brothers as they rescue two victims of a werewolf attack, the main plot point doesn’t really have anything to do with them at all. Sure, Corbin (Blair Penner) was bit and predictably transforms in a scene that is a bit reminiscent of “Teen Wolf” (the movie) or even Michael Jackson’s “Thriller” music video.

RELATED: ‘Supernatural’ takes an ‘Insidious’ note from James Wan, puts Sam and Dean into ‘The Further’

Let’s be clear, things don’t go full on “American Werewolf in London” here — although, it’d be cool if it did. The narrative structure of the episode is a bit clunky as we are shown scenes play out in the present and not that far in the past but the main gist is, amidst the attack, Sam gets shot.

A werewolf shooting guns instead of ripping people apart is an interesting notion but, you know, whatever. Ailing from a gut shot, it’s not long before the already wolfy looking Corbin decides to choke Sammy out and leave him for dead.

Dean finding Sam dead is never something “Supernatural” fans want to see, even though moments like these are old hat for the CW series. Still, taking matters into his own hands, Dean decides to down a whole bunch of pills at the hospital to kill himself. Why? Well, to have a chat with Billie the Reaper (Lisa Berry), of course. He offers himself in exchange for his brother. How noble.

RELATED: Rufus and Bobby return to ‘Supernatural’; Steven Williams warns, ‘Watch your back!’

It’s an odd, anti-climactic chain of events that play out which finds Billie informing Dean that Sam wasn’t dead. Blah blah blah … the doctors revive our hero and the two brothers end up reuniting at the hospital just in time to take out Corbin who becomes a fast fan of his new toothy state. The fact that it’s daytime, with no full moon in the sky is something no one ever bothers to bring up.

The point here is, with both brothers back from the dead again, how will the CW show maintain the high stakes as the Winchesters continue their mission to battle the Darkness and Lucifer/Castiel? That remains to be seen. One thing is definitely for certain, though. It’s something we’ve known for a very long time but “Red Meat” poses a nice reminder: death is never the end for the Winchesters. Now, who wants a burger?

“Supernatural” airs Wednesday at 8 p.m. CT on The CW.