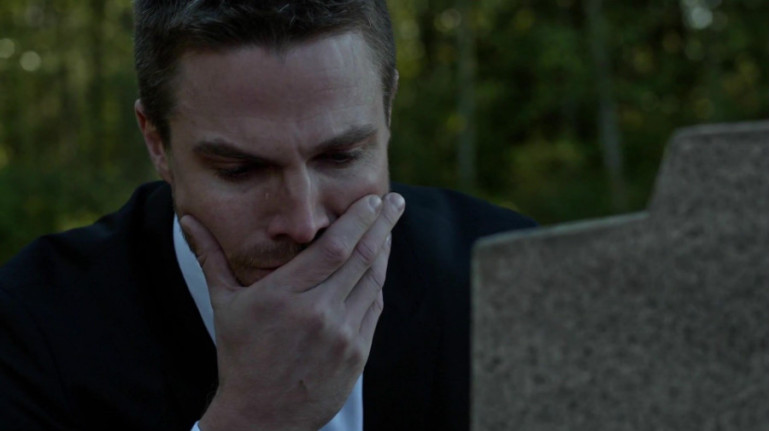 If you have not watched the newest episode of “Arrow,” you should close your eyes immediately or risk being spoiled on the biggest bombshell of the season. Wednesday’s (April 6) episode finally revealed who was in that grave we saw in the first episode of the year, and it’s a heartbreaking loss for Team Arrow.

Spoilers wait below, you have been warned…

In a twist that some fans probably saw coming, Laurel Lance (Katie Cassidy) was killed in a confrontation with Damien Darhk (Neal McDonough). It would be fair to say, however, that the person equally responsible for the Black Canary’s death is Andy Diggle (Eugene Byrd), who as it turns out has been in Darhk’s pocket all along. Shame on you, Andy!

Zap2it spoke with executive producers Marc Guggenheim and Wendy Mercile after watching a screening of the episode in the hopes of better understanding why it was Laurel’s time to go, and how they came to that decision.

RELATED: ‘Arrow’ EPs tease: ‘Death is part of the show’

“We started off this year with a promise of a death,” Guggenheim says, “And when we sort of worked our way through our various different creative choices, we realized that the thing that will give us the most pop going into the end of the season and into next season unfortunately would be Laurel.”

While some fans might cry foul over this move, Guggenheim and Mericle both made it clear that while they are obviously aware of fan activity and support, they have never and will never let it affect their creative process.

When it comes to shipping, Guggenheim says that it played no factor in the decision. “One of the things we knew people would thinks is, ‘Oh well, in the season where Oliver and Felicity get engaged and Laurel dies, that’s clearly making a choice about who’s going to end up with who.’ And truth be told, we told the Laurel/Oliver romance story in Season 1. We told that story. We never really thought about going back to it, so the shipping thing was not an element. It was not a factor for us.”

RELATED: 4 ‘Arrow’ favorites that could definitely be in the grave

As for the cast, Katie Cassidy and her on-screen father Paul Blackthorne (Quentin Lance) attended the screening to talk about how Laurel’s death affected them both.

“That scene that you see when I’m in the hospital and I say goodbye,” Cassidy says, “I say to the team, ‘I never wanted this, I was thinking about giving up the Black Canary, and I couldn’t do it.’ Honestly that scene was definitely so real shooting it because it was my saying goodbye to the team and all of us, so it definitely wasn’t difficult to get to that emotional point.”

Cassidy was gracious, as always, about her exit and grateful for the quality of storytelling her character received. “Laurel has had truly an amazing journey, and they’ve always written so well for me, and I’ve always had such an incredible arc.”

Watching Captain Lance sink to his knees at the realization that his daughter is dead was possibly the most powerful moment of the hour, but even Blackthorne was impressed with the quality of storytelling for this episode, no matter how heartbreaking the content.

“Personally, I was almost as devastated as Lance, to be honest, with the news of this happening because Katie and I have had such an amazing working relationship,” says Blackthorne. “In terms of Quentin, he’s going to have to pick up the pieces, not pick up a bottle, and reconcile what’s left in his life. Obviously with that, he’s got the Arrow family, and that will be where he’ll have to sort of find his anchor now from here on in without his beautiful daughter.”

Laurel fans are no doubt heartbroken at her death, but Cassidy and Guggenheim did tease that this will not be the last we see of our beloved Black Canary.

“In the next episode, 19, we see I’m actually in the episode, and it’s a lot of flashbacks,” Cassidy reveals.

On top of some good Laurel flashbacks to look forward too, we can also expect to see her crossing over to some other shows in The CW’s DC universe soon.

“We now live in a universe where there’s resurrection, parallel earths, time travel, and flashbacks. We have all these different ways of keeping Katie in the ‘Arrow’-verse family,” Guggenheim says. “In fact you will see her on an episode of ‘The Flash,’ playing the Earth 2 version of Laurel Lance. I will announce today that Katie is reprising her role of Laurel Lance of Earth 1 to be in ‘Vixen’ Season 2. Death does not mean goodbye on any of these shows, but we made a creative choice, and we’re sticking to it.”

As for that scene between Oliver and Laurel just before her death? It’s a mystery you shouldn’t expect to solve any time soon. “You’ll know [what she said] in Season 5,” Mericle says.

The fall of the sagging pants era is upon us