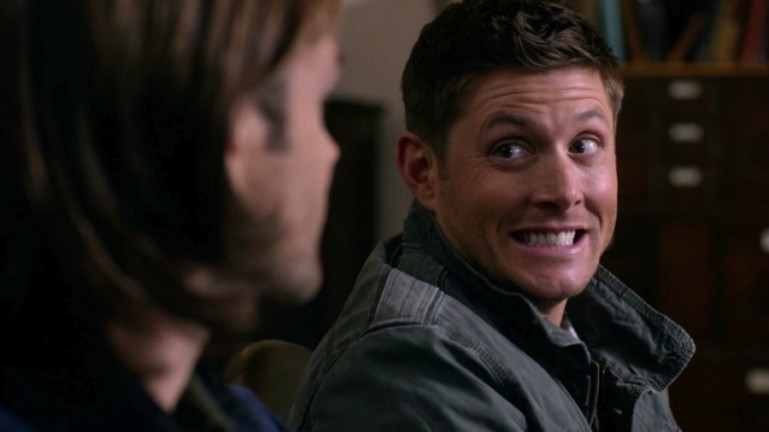 Tuesday (March 1) marks the 38th birthday of one Jensen Ackles. Better known as Dean Winchester on CW’s long-running series “Supernatural,” Ackles has definitely left his mark on the small-screen genre show over the past decade.

Not only does he play Sam’s (Jared Padalecki) wise, and often wise-cracking, older brother on the show, he’s recently popped behind the camera to flex his directing skills.

Dean’s got the ghost sickness

Many of Dean’s best moments come in quick beats on-screen. Not only is Ackles great with the facial expressions but his comedic timing is on point. From the Season 4 episode, “Yellow Fever,” the above scene finds the older Winchester brother suffering from a “ghost sickness” which pretty much makes him terrified of everything. Cats hiding in lockers are no match for Dean’s lady scream.

In the Season 5 episode, titled, “Sam, Interrupted,” the two brothers commit themselves to a psychiatric hospital as part of a case they are working. In one particular scene, the two break into an office they shouldn’t at all be in to investigate a corpse. When a nurse finds them in the room, Dean channels his inner “Cuckoo’s Nest,” drops his pants and yells, “Pudding!”

Who doesn’t love a cocky dude with all the luck in the world? In Season 3’s episode, “Bad Day at Black Rock,” Dean ends up the owner of a rather powerful rabbit’s foot. Sam, who previously owned it, has found his luck going downhill fast. With Dean coming to the rescue, nothing can go wrong. He even puts it best by saying, “I’m Batman.”

In the Season 9 episode, “Dog Dean Afternoon,” the older Winchester brother drinks a potion to communicate with a witness of a murder. That witness is named The Colonel … and is a German Shepard. Soon, not only does Dean find he’s able to communicate with the canine, but he is able to talk to pretty much any animal on the planet. Eat your heart out, Doctor Doolittle.

Sometimes death can be hilarious and in Season 3’s episode, “Mystery Spot,” our favorite brothers are faced with a “Groundhog Day”-style dilemma. Sam is forced to relive one terrible Tuesday as he attempts to keep Dean from dying. Needless to say, nothing seems to stop Dean from dying over and over until the pattern is broken by the discovery that the Trickster (Richard Speight Jr.) is involved. Big surprise.

Sure, we said only we were only going to share five moments but a classic is a classic and any tribute to Dean Winchester wouldn’t be complete without this awesome outtake from Season 4’s “Yellow Fever.” Dean may have had ghost sickness, but he never lost his “Eye of the Tiger!”

Due to the cancellation of the Allen v. Cedar Hill football game, our programming has changed a bit!

Don't worry, we still have your high school football covered!

The perfect fall panini isn’t as complicated as you think!