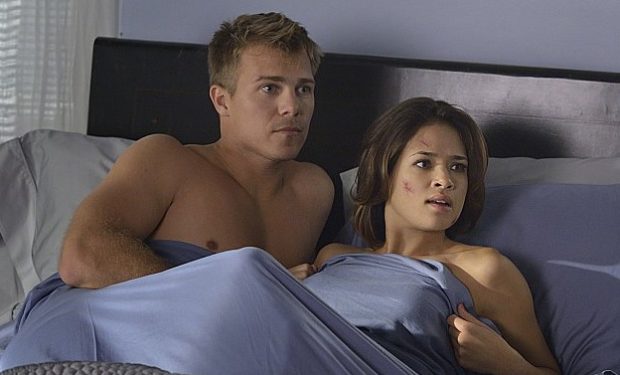 We still don’t know who the “New Beast” is on Beauty and the Beast, but after Thursday’s (Aug. 25) episode, we’re more than a little suspicious of Kyle (Michael Roark).

It’s bad enough that he never seems to be around or have an alibi when beastie things are going down, but now he’s handed Vincent (Jay Ryan) and Cat (Kristin Kreuk) over to the DHS and probably implicated Heather (Nicole Gale Anderson) in the process.

Even fans who love Kyle and Heather together are convinced he’s evil at this point.

RELATED:  ‘Beauty and the Beast’ gets the ‘It’s a Wonderful Life’ treatment

They´re so cute. I´m still hoping that Kyle is a good guy after all #BATB #MeetNewBeast pic.twitter.com/2Gq3UE47l5

We’re not 100 percent positive that Kyle is the new beast yet, but the evidence is piling up.

He’s been sporting some pretty sketchy behavior since we met him in the premiere, and no amount of cute boyfriend behavior with Heather can change that. Plus, Vincent has been suspicious of him from the start, and we trust those beast senses more than anything else.

RELATED: ‘Beauty and the Beast’ series finale: Kristin Kreuk knows how it ends

Maybe he’s just working with the DHS or trying to be a model citizen, but we’re not buying it. He’s got to have some kind of hidden agenda, and if he turns out to be this new beast, we’ll be the first to say “I told you so.”

Now, with Cat and Vincent behind bars, it’s time to start wondering how the series will wrap itself up with only two episodes to go. Tess (Nina Lisandrello) said it herself that there would be no deal or mercy available to them, so will Cat and Vincent have to live on the run forever?

That hardly seems like the happily ever after they envisioned for themselves at the start of the season.

Beauty and the Beast airs Thursdays at 8 p.m. on CW33.

What the Trump children might do after the White House

Will the Capitol rioters receive a pardon from President Trump?

YouTube bans Trump for another week over inauguration violence concerns

Sarah Thomas to be 1st female to officiate at Super Bowl

What the Trump children might do after the White House