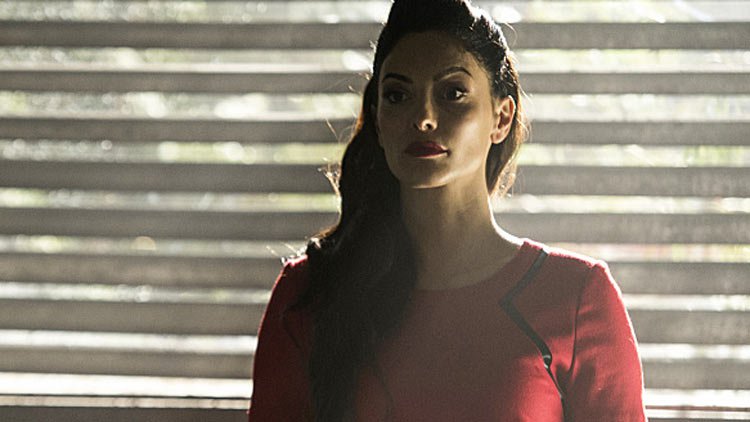 In addition to the tragic death of Lexa (Alycia Debnam-Carey) on “The 100” Thursday (March 3), there was also a lot of mythology surrounding Becca (Erica Cerra), ALIE II, the night bleeders and the end of the world offered up for viewers.

Creator Jason Rothenberg spoke with Zap2it about it all and offers up some clarification and explanation for anyone who might be confused at home in this handy guide.

RELATED: Is Ricky Whittle leaving ‘The 100’ because of bullies?

The thing in Lexa’s neck is ALIE II

“The ALIE II code resides in that crystal matrix — which we call ‘the flame’ — that came out of the back of Lexa’s head. As the Flamekeeper, Titus, it’s his responsibility to oversee the conclave and the selection of the next night blood to become the commander and then perform the ascension ceremony in which that victorious night blood becomes the commander.”

ALIE I wants that crystal matrix more than anything

“The Grounders don’t know that it’s an A.I. To the Grounders, it’s … sort of spiritual, almost a religion. All they know is that this magical thing happens and it contains, they believe, the spirit of the previous commanders and that when you ascend and get the flame, you receive the wisdom of those collective commanders who have had the flame in them before you. So it has taken on a different — it’s not technology to them, it’s religious, it’s spiritual.

ALIE II is not a sentient being

“ALIE I is the woman in the red dress. ALIE II is not its own — it can’t exist by itself. ALIE II needs a human host, for lack of a better word, so whoever takes the flame, whoever becomes the commander, is the shape of ALIE II in human form. ALIE II is not a conscious, sentient A.I. the way that ALIE I is. It’s an augmentation of whichever mind bears it, if that makes sense.”

Becca’s dark liquid is the genesis of the night bleeders

“It’s gene therapy of a sort to allow Becca to not reject the flame when it is put into her body. That’s a little deep in terms of a deep dive into what it is and we do talk about that going forward in the show.

“When she leaves the ship, we see her packing up the case that has all of those black genetic treatment vials in it and when she’s surrounded on the ground by the people that are coming out of the woodwork in their hazmat suits who, according to Titus, when Murphy was showing him the murals on the wall of the temple, are the first night bleeders — there are dots that can be connected there.

We will connect them a little bit more clearly going forward, but I’m sure our perceptive fans will be able to connect the dots that that stuff that Becca is giving to herself that allows her to not reject the flame that she puts into her own head is what she gives to those people that surround her, which creates the first night bleeders and then they genetically pass it on after that. That’s how in the world there exists occasionally a night blood.

“Becca ultimately had to quickly turn those other people, who were essentially doomsday preppers, had to give them the genetic treatments so that they could bear the flame. The flame itself has, over time, been responsible for keeping itself alive and finding a host. It’s about how does that process somehow take on mythological, spiritual aspects — the conclave system and all of that grew up as a way to find night bloods so the flame can go on.”

RELATED: ‘The 100’s’ Octavia not trusted by Grounders or Skaikru right now

The story of the world 97 years ago is done, at least for Season 3

“I’d like to tell a story about that in more detail, but I’m not sure we’re going to get a chance to. Not this season. We can connect the dots of that moment [when Becca reaches Earth] to where we are now. I think it would be fascinating, but it’s not a story we’re going to be seeing this season.”

Food Fix: Catch some Mexico City vibes at Sueño in …

Escape DFW with nearby state parks for an outdoor …

Dish with Daily Mail – online dating tips in a pandemic …

How to master TikTok transitions with J-Kruz

Inside look at Dallas brunch spot with a french twist …

This is the only dance experience for adults in Dallas

Here’s a new way to workout: StretchLabs in North …

You can still get tickets to see Smokey Robinson …

Where to find the best shrimp dishes in Dallas