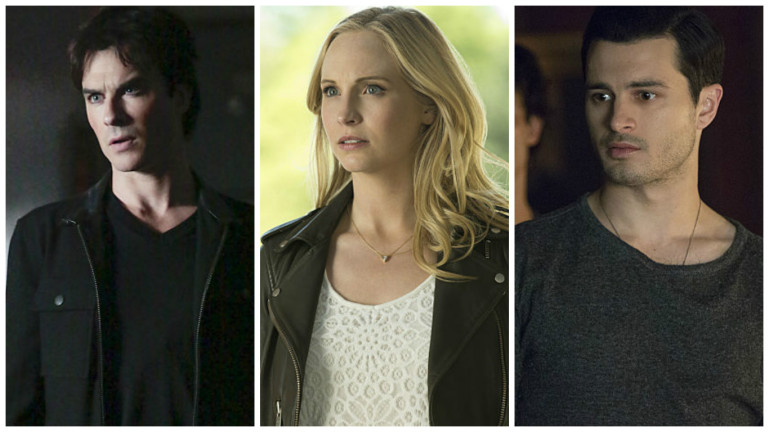 Prepare for some bad news, “The Vampire Diaries” fans, because Kat Graham confirmed at the 2016 Teen Choice Awards that the final season of the show will be fatal for one of our beloved characters.

According to The Hollywood Reporter, this “big death” won’t be right away, but it’s not exactly far on the horizon either. “Not in the season premiere — but, you know, midway through, someone’s kickin’ the bucket,” Graham says.

This might be a good lesson in “be careful what you wish for,” seeing as Zap2it just released our wish list for Season 8 and a major character death was pretty high on the list of requests. Oops?

RELATED: 8 thing we want before ‘The Vampire Diaries’ ends

Seeing as it’s the final season, this death could literally be anyone, which makes it that much more terrifying. Now that we know it’s coming, however, the only way to prepare ourselves for the inevitable swan song is to speculate about which characters have a good chance of getting killed off, and which ones are definitely safe … at least until the series finale.

There’s absolutely no way either of these brothers is dying off before the series finale. The show has shifted its focus entirely to the two of them since Elena (Nina Dobrev) left the picture, and there’s just no way either of them is bowing out before the curtain call. Stefan (Paul Wesley) and Damon (Ian Somerhalder) are safe as houses for now.

Caroline – not a chance

Besides the fact that “The Vampire Diaries” has to pay off not one, but possibly two epic romances with this girl before the end, she’s become the beating heart of the show lately. More importantly, there’s not really a reason to kill her off other than shock value since she doesn’t typically play a huge role in the supernatural shenanigans happening in Mystic Falls.

After all the crap Alaric’s been through in his eight years on the show (vampire wife, endless neck snaps, losing Jenna, evil alter-ego, dying, dying again, dying AGAIN, losing Jo at the altar, losing Caroline to Stefan), we just don’t think the writers have it in them to rip this guy away from his twin daughters. Alaric happily ever after or bust!

We’re about 90 percent sure that Bonnie (Kat Graham) won’t be the one to kick the bucket before the end, but we’re less sure seeing as her life is still linked to Elena’s. If, for some reason, Nina Dobrev is able and willing to return for the back half of the season to wrap things up, then we might have to say bye-bye to Bonnie. Plus … Kat Graham was the one to spoil the news. Suspicious, no?

Matt Donovan (Zach Roerig) presents an odd possibility because like Caroline (Candice King), there’s not really a good reason to kill him, especially now that he’s left town to escape the supernatural. Unfortunately, he’s a human in a town full of ancient monsters, and even if he’s survived this long, that’s a dangerous way to live. Watch your back, Matty!

These two haven’t been seen (for the most part) in years on “The Vampire Diaries,” but we’re expecting a return from one or both of them during the final season. It would be a bit of a cop out to kill off a character who isn’t actually on the show anymore, but both Tyler (Michael Trevino) and Jeremy (Steven R. McQueen) would count as “big” deaths.

If we’re right about this one, we’ll be heartbroken, but it seems to us that Enzo (Michael Malarkey) is the most likely to die in this deadpool. He’s currently in the clutches of “evil herself,” and that doesn’t sound like a situation you can escape alive very easily. Plus, while he’s a major character, he’s still technically new to the show, which makes him more susceptible to sudden character death than any of our original characters.