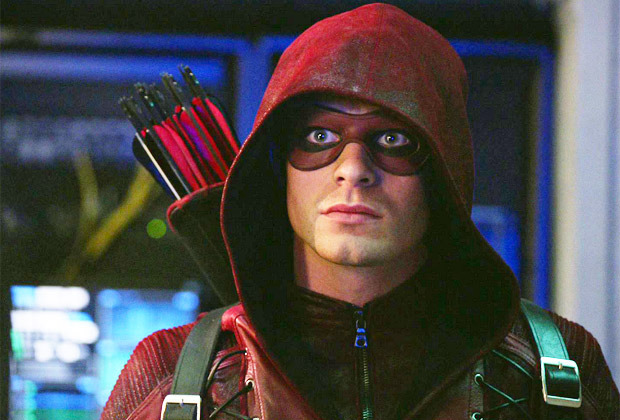 Oliver (Stephen Amell) and Felicity (Emily Bett Rickards) are building a new team on Arrow, but from the looks of it, an old ally may be rejoining the fight.

Roy Harper (Colton Haynes) is making his return to the show for at least one episode and it might be happening right now. Echo Kellum (Curtis/Mr. Terrific) posted a trio of photos on Snapchat of himself and Haynes in Vancouver on Sunday (July 31), where Arrow shoots, giving fans hope of a return early in the season. While it’s definitely not confirmed that Haynes was in town for Arrow-related purposes, he previously revealed that he would be returning for a “few episodes” of Season 5.

It’s the timing of his return to Vancouver that makes it so exciting. With Oliver and Felicity recruiting and training a new Team Arrow, this is the perfect time for Arsenal to reappear — whether he’s helping train the new heroes or joining them for the fight.

After leaving the show in Season 3, Haynes’ Harper was only seen once in Season 4. Hopefully he’ll be sticking around a bit longer this time around. With Thea (Willa Holland) and Diggle (David Ramsey) leaving the vigilante life, the Green Arrow is going to need all of the help he can get. Previously, Haynes said he would be returning for more than one episode in Season 5. So it’s not crazy to think he could be suiting up as Arsenal once again to help Oliver and Felicity shepherd the new team.

That said, what will Haynes’ return mean for Thea? The love these two shared was very real, but Thea has changed quite a bit since the last time Roy came to town. With her leaving her Speedy persona behind — at least for now — where does her ex fit into her life?

A Dallas ristorante celebrates their 1-year anniversary with some great deals! (and a recipe from Naples, Italy!)