Anado Kabika Unleashes Her Multifaceted Talents with Her Single Release on January 20th, 2023 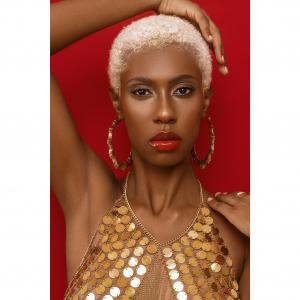 NEW YORK, UNITED STATES, January 25, 2023 /EINPresswire.com/ -- A multifaceted artist from the Democratic Republic of Congo is excited to announce the release of her single on January 20th, 2023. The rising model, singer-rapper, and actress has been honing her craft for years and is finally ready to share her talents with the world.

Born and raised in the bustling capital of Kinshasa, Anado has always been a woman of many passions. As a child, her first love was soccer, but her family did not support her dreams, and she was forced to let the sport go. However, this did not stop her from pursuing her other passions, including modeling, singing, and acting.

At 16, Anado began her modeling career with a local fashion agency, ASMA (Amigo star model agency). She quickly rose through the ranks, winning the title 1st runner-up in several reality TV contests and fashion shows, including the prestigious Miss DRCongo competition in 2016. Her career continued to flourish, with appearances in commercials for major local brands such as Vodacom, Ecobank, Betasol, and Beviour hotel and winning the award for best runway model at Afrifamu in 2020 in Los Angeles.

But Anado's talents don't stop there. In addition to her successful modeling career, she is also a talented singer-rapper and actress. Her love for music comes from her cultural background and the many talented artists and singers surrounding her. She is excited to finally release her single and share her talents with the world.

Despite her many successes, Anado has faced her share of challenges. She struggled to convince her family of her many different passions and has had to work hard to achieve her goals. In 2019, she flew to the United States to pursue her dreams, starting from scratch and continuing to work hard.

Anado's future goals are to become a successful model and one of the best artists in the world. In addition to her career aspirations, she is also an active philanthropist, having started her NGO "Heart of Africa" to help raped women, mothers, and young people who have no support to realize their dreams. She is determined to inspire African youth through her personal history of hard work, perseverance, and consistency. She encourages others to believe in their dreams and be willing to start over and have new beginnings.

About Anado Kabika:
Anado Kabika is more than just a model, singer-rapper, and actress; she is a true force for change. With her powerful voice and unwavering determination to succeed, Anado inspires young people everywhere. Don't miss her second single release on January 20th, 2023.