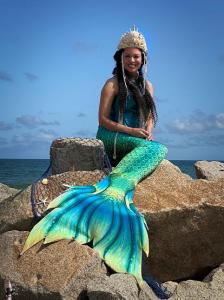 Ocean Child is a mystical mermaid destiny series that is inclusive across genders, ethnicities, abilities, & ages. Who doesn’t love a great mermaid story?

From the writing team of Marilyn Swick of Plymouth, Massachusetts and Laura Koons of Katy, Texas the two have created a mystical world of mermaids, dreams, hope, and destiny. The two writers began writing screenplays and producing films together seven years ago in Houston, Texas.

"Marilyn and Laura have written and created a story that is every childhood dream come true. They created a magical world that feels heartfelt, inclusive, and most importantly full of endless wonder. An incredibly well-crafted and imaginative screenplay, with characters that embody worlds of their own that you can’t wait to learn more about!", says Heather Whitty, Casting Director and Acting Coach.

Ms. Swick shares, “We chose Plymouth Beach because the rocky beaches would best serve to showcase our mystical mermaid cove and we loved the rocks.” The screenplay of “Ocean Child” itself has already been winning laurels across the film festival circuits for the past several years. The storyline follows a young girl’s journey towards her destiny as a mermaid attending the underwater School of Mermaidology and Neptunism in spite of her mother’s fears. Her name is Hope and she is a merhuman, just like her father and her grandmother.

The diverse cast of “Ocean Child” traveled from Hawaii, New England, Texas, and Virginia for the shoot. The film features eight mermaids from six years of age and up including Queen Amara of the Seven Seas and Aria, the music teacher who plays a magical saxophone and sings from their School of Mermaidology and Neptunism. Avery Rodgers, from Virginia, plays the lead role of Hope and is also a singer and songwriter. She is in the process of recording the original song “Wish Upon A Starfish” this month. Marilyn Swick plays the role of Serena, Hope’s grandmother, who was the original Queen of the Seven Seas and she too is a merhuman who gave up her mermaid life when she fell in love with a sailor on the Navy ship, the Blue Ghost. LaTeace Towns-Cuellar, from Houston plays the role of Queen Amara of the Seven Seas. Evelyn Rubio, also from Houston portrays the role of Aria, the music teacher in the School of Mermaidology and Neptunism. She plays a mean saxophone, and currently she is working on our second original song with Ms. Swick that will be recorded in the studio this fall. Joy Tuck, who resides in Hawaii reprised the role of Joy from our original proof of concept “Wish Upon A Starfish”. Other New England supporting cast members include Mary Herbert, Alex Bensley, Rhys Cote, Gavin Walker, Chloe Trejo, Jayla Onwuakor and Lexi our Grand Champion Doberman played Hope’s trusted companion, also in her mermaid tail.

Marilyn shares, “The original concept “Wish Upon A Starfish” was captured as a proof of concept five years ago with a diverse cast in Texas. This storyline expanded into a series which brought more diversity to the cast and ultimately became “Ocean Child”. We believe it is time for a mystical mermaid story that spans generations and is inclusive across genders, ethnicities, abilities, and ages. Who doesn’t love a great mermaid story?

“Ocean Child” will begin its journey in the Academy Award Qualifying Film Festival Circuit in 2023 with the culmination of this mystical series being optioned by one of the networks. Please follow our journey on our IMDB and FB pages.